Muslims Migrated from Makkah to Ethiopia under compulsion 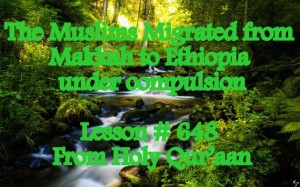 Tafiizu – (overflow), here it aims that their eyes are filled with too much tears that they overflow and the tears come out from the eyes. Shaahidiina – it is plural of Shaahid. The person, who recognizes and believes in the Truth, is called Shaahid.