Stress not in your Religion other than the Truth 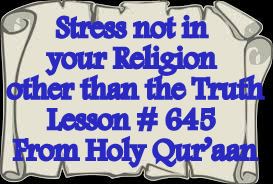 Siddii-qah – (Saintly woman), the highest rank from the human beings, is of the Messengers and Prophets (peace be upon them). These are Men (male). Second highest rank of the mankind is Sidiiq (Saint), Who understands the truth immediately and clearly. A chaste woman can reach also this rank and she is called Sidiiqah.

Correct affairs in respect of Prophet Jesus Christ (peace be upon Him) have been described in this verse. At first, that He (peace be upon Him) was only a Messenger of Allaah Almighty, not more than it. Neither He (peace be upon Him) can be God (Allaah Almighty), nor a partner in His Divinity, and being a Messenger, is not an extraordinary matter. Many Messengers and Prophets have passed away before Him (peace be upon Them). As they were Mankind, likewise Jesus Christ is also a Mankind (peace be upon Them) however, being a Messenger, His degree of dignity is higher than other human beings. His mother was also a Mankind and Her rank is higher too than other common people as She was a Siddiiqah (Saintly Woman). Proof of Their being a mankind is that they both were necessitous of taking food, so that they may maintain their lives. Allaah Almighty (God) is not needy of anything, and He says, “See how We make the Revelations clear for them”, even then see them – how they are turned away. The person, who neither can provide any gain, nor he is master of any detriment, nor he can hear and nor understand, how can he be a worshipped. These all virtues are only of Allaah Almighty, so it is wrong and useless to bow humbly in front of (or determine worshipped) any other than Allaah Almighty, because actually only He is the God, the Hearer and the Knower.

Laa  tagluu – (Do not stress), this word is from guluu, which means ‘to overstep bounds, to say or do more than the requirement’. ‘Ahwaaa-‘a – (the vain desires), it is plural of Hawaa, which means ‘vain and fabricated desire’.

According to previous verses, Jesus {Messiah (peace be upon Him)} says (himself): O Children of Israel! Worship only Allaah Almighty Who is my Lord and your Lord. Whoso ascribes partners unto Allaah Almighty, for him, He has forbidden Paradise. His abode is the Fire. And for evildoers there will be no helpers.

At first, Allaah Almighty commands in these verses, “Say: O People of the Scripture! Stress not in your religion other than the truth, and follow not the vain desires of folk who erred of old and led many astray, and erred from a right path”. It signifies toward Gospel, which forbids from ascribing partners to Allaah Almighty. But after that, a scholar of the Christians, named Paul, promoted worshipping of idols in his own religion also, when he saw the Romans and the Greeks doing so. And they began to say too their Messenger Jesus Christ (peace be upon him), son of God as the Romans and Grecian used to say their demi-gods as sons of God. And they began to state godhead virtues in Messiah (peace be upon him) also like those demi-gods. Even that the religion of the Christians had become imitation of old wrong religions.

Allaah Almighty has described here that they had erred of old (the Romans and the Grecian) and led many astray, and erred from a right path. You should not do like their deeds but follow correctly your own Scripture.