“We have not transgressed the bounds of duty” 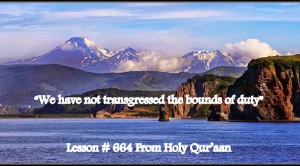 After a few days, that bowl was found on a goldsmith shop and the shop-keeper told that the bowl was sold to him by Tiim and ‘Adii. Then the case was decided according to this verse, because the heirs did not have witnesses. It is commanded that if it is afterwards ascertained that both of them have been guilty of sin and have seized some goods, and their oath was false, let two others take their place of those nearly concerned, and let them swear by Allaah, (saying): Verily our testimony is truer than their testimony and we have not transgressed (the bounds of duty), for then indeed we should be of the evildoers. Allaah Almighty says: Swearing in this manner will be hopefully more powerful. They will bear true witness or fear that their oaths may be rejected too likewise the oaths of executors earlier.

It is considerable that how much little matters have been explained very clearly in the Word of Allaah Almighty (Holy Qur’aan)? It aims that the deeds, acts and mutual relations of the mankind may be corrected likewise his beliefs and manners. Nobody may violate the right of anyone, and if any sinner violates it, then it may be compensated, because the trial of the entire religion is “Affairs” only.

Then it is commanded that all the matters will be correct at the very time when fear of Allaah Almighty will be in the heart and everyone will try to escape from the evil deeds due to the fear of punishment and His commands will be listened carefully. So it is being reminded again and again “be mindful of your duty to Allaah and hearken. And whosoever neither frightens from Him, nor listens to Him, if that person is not a disobedient then what is he/she? And it is a Rule prescribed by Allaah Almighty that He does not guide the disobedient towards the Straight Path and they go astray, who neither fear from any threat, nor hearken the truth.