To please the idols, they used to do all such deeds 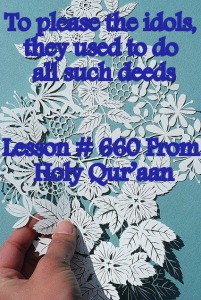 Allaah Almighty commands that there was a folk before you, who asked about such disclosers, which were not made unlawful clearly, when they were replied then they knew that it was difficult to act upon them, so they denied from believing into them.

At first, they met with difficulty due to asking the command about such a matter, which was left only for their easiness. Secondly, when they were bidden to do as commanded, they felt trouble in its procedure compliance and refused to obey this order, and became disbelievers.

In the second verse, it has been forbidden from another absurd tradition of the idolaters, due to which, such lawful things were used to make unlawful by them, which were not made unlawful by Allaah Almighty. For example; they used to give up drinking the milk of any animal and say that it was left on the name of so and so idol. Only that particular idol was authorized to reap advantage from those ‘free’ animals, as now a day too, any male buffalo, bull or stallion etc. is set free.

These animals had separate names. The Bahirah was a female camel whose ears were cut; one would not allow his wife, daughters, or any of his household to benefit from its wool, hair or milk. But, if it died, they would share it. The Sa’ibah was a female camel, let loose for free pasture for the idols, and nothing was allowed to be carried on it. As for the Wasilah, it was the female camel that gives birth to twelve offspring females without any male camel’s birth in between the twelve. When female camel delivered for the thirteenth time, they would cut its ears and saying, It has Wasalat (connected deliveries),’ and they would not slaughter it, hit it or prevent it from drinking from any pool. Ham’i was the male buffalo, bull or stallion etc. which was father of many offspring.

This all was done to please the idols, but along with it they used to say too that Allaah is also pleased due to these deeds. It is commanded that Allaah Almighty has not appointed anything in this nature (as explained above). They invent a lie and most of them have no sense, who say it the order of Allaah Almighty.

Lawful is Useful, but Unlawful is Harmful 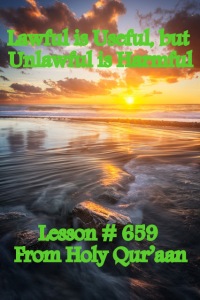 Summary of that narration, which has been being described with effect from the last two sections, is that you should neither increase anything, nor decrease yourselves in the matters of the religion. Do that, about which you are enjoined to do and refrain from that, which has been forbidden.

Attention of the Muslims has been drawn towards another matter in this verse. Some people began to ask such questions that if they were made known, then those matters would have been framed as the laws of the religion, and it would have become indispensable to act upon them. So this kind of investigation has been prohibited. There is a chance of narrowing an open way in it, willing or unwilling.

Allaah Almighty says that it is necessary for the believers that they should not ask the questions about such things, due to which, either the labour may increase, or the grief and sorrow can be created, because at the time of Divine Revelation, every answer will be descended by inspiration. And then it would become incumbent to act according to the revealed command.

This is a facility from Allaah Almighty that a lot of matters have been left without illustration. Bear in mind along with it also that Allaah Almighty is Forgiving too. Actually it should be in the manner that everyone would have to be ready to act upon that which is commanded, and none should ask any question from one’s own side willing or unwilling about anything.

This verse has the same instruction, which has been accepted as the best method of framing the laws. That is to say; to make those things lawful, which are useful clearly, to prevent entirely from those things, which are harmful openly, and to let the remaining matters go on every person’s own free will, that one may decide oneself thoughtfully. This is the Way, which Islam has chosen. Alas! Either many people do not understand, or they do not act in accord with it, who understands.