Trial of those who were evil-livers 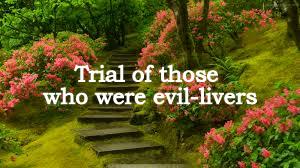 ‘Al-qaryatu – (the township), many commentators have explained that this township was ‘Iilah, which was situated by the shore of Red Sea between Madian and Tur, and because the sea was near to them, therefore, these people were accustomed of fish hunting. To which incident it signifies, was happened during the period of Prophet David (peace be upon Him). Nowadays that place is called Aqbah where the township ‘Iilah was populated.

Haazi-ratal-bahri – (by the sea), the word haazirah is from hazuur, which means “to be in front, to be present”. Haazirah means “in front (of), opposite to, near, adjacent etc.” ‘Al-bahri aims “the Red Sea”. ‘As-Sabtu – as per Arabic language, it aims the day of Saturday. This day was prescribed for worship and observed as closed holiday against dealings and business for the Jews.

Hiitaanu – (the numbers of fish), this word is plural huut. In Arabic, it means a fish. Shurra-‘an is plural of shaari’ which is subject from the word shara’. Shara’ means to appear. Shaari’ is the thing which appears in abundance and may be seen by everyone openly. A wide road which is visible to all, is called Shaari’ (highway, public road). Here it aims “the fish used to leap and jump in the water in abundance in a short while and those were very fat and fresh”.

About stubbornness, fearlessness and obstinacy of a class from the Children of Israel has been described in this verse. Residents of ‘Iilah Township were very refractory and bold in breaking the Divine Law. It was a special command for the Children of Israel that they should do nothing on the day of Saturday save worship of God. So, besides other any kind of business or dealings, the fish hunting was prohibited too for them on Saturday.

The people of ‘Iilah were involved in this trial that during the days other than Sabbath (Saturday), either the fish did not come in the sea unto them or if came, that were very less in quantity. But on the day of Sabbath (Saturday) the sea was full of big fish. It was a test of their obedience. It is commanded in the verse that Allah Almighty involves the disobedient people in test and trial in the same way, so that they may be habituated of obedience and give up obstinacy.