The Limits Imposed By Allah

Tilka (These) it signifies towards those six/seven orders which have been expounded in the earlier lessons.

Huduudun – (plural of Hadd which means limits) it aims the limits of the customs, codes and regulations imposed by the God Almighty not to approach them as pressed again and again in the Holy Qur’an.

The Holy Qur’an has explained all concerning rules and regulations after discussing about blessings and becoming obligation of the fasting also cleared the necessities and codes of being at one’s devotions in the mosque. Now it has been warned in this last piece of this verse that all the laws, principles, limits and prohibitions have been deduced by the God Almighty.

It will not be a customary thing to turn the face from them and disobey. Moreover the God Almighty has exposed them Who has the Knowledge and Philosophy, His Guidance and Commands are rightful, based on advisability and guarantor of betterment and success. This world and the hereinafter will become better with their execution and following. Disobedience and refusal from them will become forerunner of distressed and destruction. So nobody should cross these limits and should remain within the imposed limits of Him.

As the God Almighty has expounded in detail the commands regarding the fast, its limits, timing, to be at devotions in mosque and other concerning matters, like this He commands about remaining orders for mankind’s betterment and prosperity in detail. Fear of God, control of the passions, spirit of obeying and obedience, sincerity and sacrifice, chastity and honesty, good nature and well wishing will grow in the human being due to strongly abide by these rules.

The person can not establish himself any path for his advisability and betterment due to less sense nature. He needs instructions of a Sage and Excellent Life, an Aggregate Scholar and an Absolute Master which is One i.e. the God Almighty. He has guided us towards success and prosperity with His extremely Kindness. So we should go on the straight path without hesitation and get the real object. 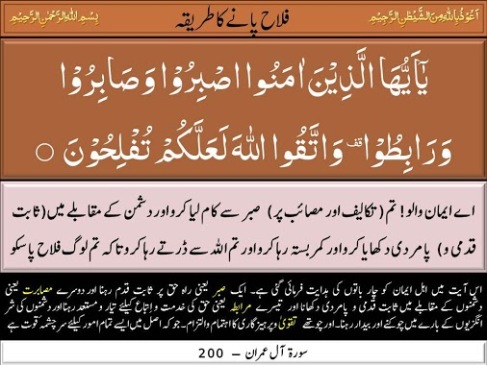