The Jews hide the News regarding Muhammad which exist in Torah 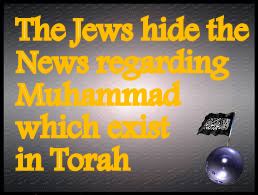 Zarhum – (leave them), zar is verb of command which has been derived from wazar , which means “to leave, to give up”.

Khaw-zun– (pastime), khaw-z means “to enter into water”, then it means “to involve in some activity in such a way that one becomes unconscious about everything else. Here it aims “those thoughts in which they are lost”.

Yal-‘abuun– (play of caviling), it is resembling verb which has been derived from la-‘ab which means play, sport, game etc.

In the previous verse, it was told that the idolaters of Makkah did not believe in Holy Qur’aan because of their stubbornness, even they said that Allah has never revealed any Book upon any mankind. Then Prophet Muhammad (grace, glory, blessings and peace be upon Him) was commanded that He should ask them: Who revealed Torah upon Prophet Moses (peace be upon Him), due to which, the Light and the Guidance spread in the world? Although those people do not obey Its commands properly, for whom that Scripture was revealed. Moreover, some parchments of that Book which are of their own benefit, they show them to the people, and hide those pages, in which Good News about arrival of the last Messenger Muhammad (grace, glory, blessings and peace be upon Him) has been described.

It is commanded that Allah Almighty taught the Jews such matters and affairs through Torah which they did not know. And not only they but even their fathers and ancestors were also unaware. And then the Jews spread those teachings in Arabian territory and you (O people of Makkah) also got some knowledge from which you and your ancestors were totally unaware.

When the tribes of Madina (Aws and Khazraj) came to Makkah, they recognized Prophet Muhammad (grace, glory, blessings and peace be upon Him) from the signs, which the Jews told them and they believed in Him as Messenger of Allah Almighty, but the Jews themselves remained deprived from the Belief. Moreover, the idolaters of Arab got more courage of denial because of them, and even they began to say that Allah has revealed never any Book.

After this, it is signified that there is no expectation from them that they will give correct answer of this question. You should say them Yourself: Torah was also revealed by Allah, after It, He revealed Gospel too, and at the end, all earlier Scriptures were finalized and completed by the Revelation of Holy Qur’aan. Even then, if they do not listen, then leave them to their play of caviling, arrogance and stubbornness. Let them waste their time in play and useless matters. They will be punished for all of it very soon. They will be destroyed in this world as well as will suffer the severest punishment in the Hereafter.