Furious scene of the Hell 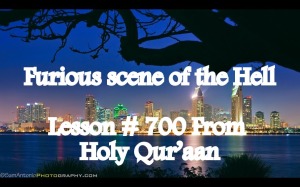 In this verse, it has been told about those people whose condition was described in the previous lesson, that one Day (on the Doomsday) they will be brought upon the Fire of Hell. They will lose their sense when they will observe Its rapidity, heat and severity. The words, which they are saying today, “Allaah is nothing (Let’s flee to Allaah Almighty), we gain our end by the support of these worldly things, which are more powerful. We should feel thankful to these things”.

“They will forget everything and will have faith that this Fire of Hell is punishment of their wrong deeds, which in the world, they had considered as good deeds. And unspontaneous, these words will come out from their mouths, “would that we might return in the world, then would we never deny the Revelations of our Lord but we would be of the believers.

It is commanded: O Muhammad (grace, glory, blessings and peace be upon Him): If You observe that furious scene, on the Day of Resurrection, when they will cause to stand on the Fire and due to fear they will be about to die, then You (grace, glory, blessings and peace be upon Him) will be surprised that they are the people, who had become Namrud, Pharaoh, hāmān, Qarun, Shaddad  and so on in the world. Today (on the Judgment Day), when all the commands of Holy Qur’aan are being faced by them, then they have been confounded and said, “Oh, would that we might return in the world! Then we would be of the believers”.

Holy Qur’aan has frightened the disobedient people from the Hell and commanded: That is a heap of Fire, in which those people will be cast who do not give any importance to the commands of Holy Qur’aan and Sayings of the Messenger (grace, glory, blessings and peace be upon Him), but they try to find errors in it and depend solely on their own will and discretion.

Nowadays, it is the behavior of maximum people that they have been earnestly diligent in fulfilling their own desires and if they are terrified from the Fire of Hell, they say: All of these are self-fabricated words, the Hell has no reality. They should have to know that the reality will appear immediately after death.