Some restrictions imposed by Allah 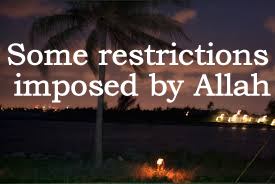 It was described earlier that; becoming a mankind depends on the mankind that he should know his Lord and pass his life according to His Commands, and it was explained also that which thing prevents from knowing Lord, that is greed of worldly things. Desires of the human being sulk like children that those should be fulfilled. Whereas, his Lord commands: Be cautious! You should not be entangled in the net of wishes. We have imposed some restrictions on their fulfilling in the world and determined some limitations. You can fulfill your desires remaining in those limitations, how much you can. You should not cross the line.

It is too much difficult that the human being tries every time to run away. He looks his death in restrictions and considers that “The life is the name of: Eating, drinking bellyful and enjoying only”. He produces sources for it and gathers wealth. If he cannot do so then snatches and robs from others. Who has the time in these disputes that he would have to be busy in search of Lord? Then, Messengers (peace be upon Them) are sent for explaining about these matters. They bring the Scriptures of God Almighty along with Them, recite before the people and cause to understand them. They act upon the Revelations and teach the people by means of their own acts. If They are obeyed and followed, it becomes easy to know God Almighty and obey His Commands. The Messenger (peace be upon Him) gets them released from the circle of wishes and teaches them the ways of fulfilling like human beings. He (peace be upon Him) says: It is not suitable for him to continue eating, drinking and fulfilling sensual deeds every time like animals; according to the dignity of the mankind. Allah Almighty has determined the ways of his improvement. It is his duty to follow His instructions.

Neither any Messenger will come after Muhammad (grace, glory, blessings and peace be upon Him) and nor any Scripture will be revealed after Holy Qur’an. Therefore, if the mankind wants to become really a mankind, it is incumbent to obey the Revelations of This holy Word. And if he wants to follow his unbridled sensual wishes; like animals and is desirous to pass his life in the sources of their fulfilling, then he has choice. We don’t bind him.

The Scripture of God Almighty desires to ask from him (mankind) the same that if he does not believe in this Revelation; then what is other thing to which will he accept? If he believes then he should understand that the punishments which have this Scripture explained for those who have been entangled in the world, if he is punished according to them, then he cannot accuse any other save cursing himself. Then he will have to suffer that what will fall to his lot.

The biggest weakness of the human being is his sensual wishes. And he wants to fulfill them immediately. Allah Almighty does not prevent from fulfilling those wishes. However, He teaches the way of their fulfilling in which he can reap advantage at full scale but that is not harmful. Moreover, some labor is must for it as – bearing the expenses of wife after wedding, with which such pleasure of own home and children is obtained, which does not exist in evil-living.