Stories of the Jews are a lesson for the Muslims 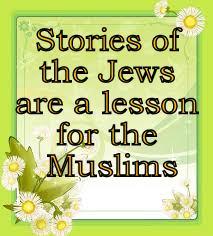 Qatta’-Naa – (We have sundered), it is past tense, origin of it is taqtiii’, which has been derived from qata’. Qata’ means “to cut”. Taqtiii’ means “to cut into little pieces”. Here it aims “they were divided in little tribes being dispersed due to the reason of their wicked deeds”.

The Children of Israel were descendants of twelve brothers and they had twelve big lineages, to whom, Prophet Moses (peace be upon Him) desired to accommodate in Palestine after getting them liberated from Egypt, where Pharaoh and his nation had made them target for tyranny and torment.

These people entered in the Peninsula of Sinai after crossing the Red Sea. But it was not possible for them to enter Palestine without fighting. Complete detail about this story has been described in Surah ‘Al-Maaa-‘idah that they denied from fighting and wandered in the dreary fields of Sinai Valley for forty years.

At last they conquered Palestine during the times of Prophet Yusha’ (peace be upon Him) and entered in the Holy Land. Then a very powerful sovereignty of the Children of Israel was established. That sovereignty remained established until they remained in the terms of intimacy mutually. The power and sovereignty was lost from them when their organizers departed. At last, due to quarrels with one another, they were dispersed hither and thither.

It has been commanded in this verse: Due to infighting between themselves and mutual rancor, We separated them in little tribes and shed abroad in different countries. Some of them were righteous and maximum people were disobedient and vicious. There was a time when they ruled prosperity as well as were entangled with calamities. They were required to learn and get warning from every kind of circumstances, and acquire collective power again; being unanimous in opinion among themselves, but they continued quarreling with one another, and their condition had gone from bad to worse.

The aim from describing about the circumstances of the Children of Israel is that the Muslims should learn and take a warning from them. And they should never let to lose their mutual alliance and amity. Alas! We did not take warning from their circumstances and could not be united, unanimous in our opinions. Holy Qur’an has been challenging us continuously, but we are those who don’t feel. (God forbid).