Engagement of attention unto the Revelations of God 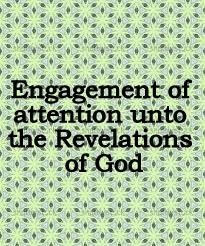 147.  And those who deny Our Revelations and the meeting of the Hereafter, their works are fruitless. Are they required aught save what they used to do?          146b.  Zaalika bi-‘annahum  kazzabuu  bi-‘AayaatiNaa  wa  kaanuu  ‘anhaa  gaafiliin.

It was discussed earlier that the people who perceive themselves superior and bigger unnecessarily, whereas they do not have any right to consider themselves so, and falsify the Revelations of God Almighty; observing them clearly, and adopt the way of error; leaving the way of righteousness, God Almighty bereaves them of considering into His Revelations.

In this verse, the reason of bereaving has been described. It is commanded that the arrogant people are deprived of thinking and meditating because they falsify those Revelations of Allah Almighty, which have been either revealed by Him in His Scriptures or He has disclosed them in the world commonly. And they say to those people foolish (God forbid), who consider that the Revelations are proof of God’s existence. They do not engage their attention unto those Revelations. Moreover, either they consider them sport and amusement or close their eyes from them absolutely and are engaged in a spree. Gradually, it becomes their habit that whether anyone asks for anything, they mind their own business. Such a habit is dull of understanding and nothing is visible to their heart except following fearless their desires.

It is a sign of it that Allah Almighty has deprived them from the Guidance and has seized the power of understanding of them regarding His Revelations, and it is result of their own wicked deeds. Those people who falsified the Revelations of Allah Almighty and denied the Day of Resurrection, and ignored the Sayings of the Messengers (peace e upon Them) in a jest that coming of the Day of general Resurrection is certain, they should not have any hope that after death, any reward will be given to them of their good acts and they will dwell with comfort and ease.

Comfort and rest after death is only for those people, who will understand the Revelations of Allah Almighty in this world by observing Them, and they will do good works having faith that, on that Day (the Day of Resurrection) they would have to be liable of their deeds being present in the Court of Allah Almighty.

After death, only good works and good belief will be useful and their fruit will be bestowed. Those who do not believe in the Day of Resurrection, it is open that their entire works were useless with regard to the Hereafter. However, if those works are good, their retribution will be given to them surely in any form but without deliverance.

When the human beings will be standing before Allah Almighty after death and the account of afterlife will be begun, at that time; they will be told: Show that what you have brought for today, so that you are paid its remuneration, because as you know that: No gains without pains. If you have nothing to show, you don’t deserve any good remuneration.