Pharaoh said: we will slay their sons and spare their women 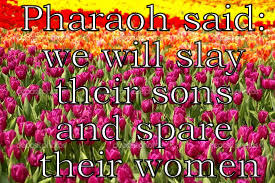 ‘Aali-hatak – (thy appointed gods), ‘aalihah is plural of ‘ilaah. ‘Ilaah means – Worshiped, God. Pharaoh used to say himself biggest worshiped and caused to fall the people prostrate before him. But he had arranged to keep his appointed little gods (idols) in the houses of common people, so that they should keep them in front when Pharaoh does not exist and they should fall prostrate before those idols. Some people have told that those were idols of cow.

First of all, the courtiers of Pharaoh arranged competition among Prophet Moses (peace be upon Him) and the wizards, but when Moses (peace be upon Him) won against them, then they thought: If both brothers (Moses and Aaron – peace be upon Them) would be put off as they are, they will overthrow our government in some days because the Children of Israel are under their control, and along with them, many of our people will be taken in also. Then it will become very difficult for us. After thinking as such; they went unto Pharaoh. Whatsoever they said there, that has been mentioned in this verse.

It is commanded that when the wizards were killed, chief courtiers of Pharaoh’s government fell about worry that now; how should Moses (peace be upon Him) be stopped that He may not make the Children of Israel His followers by becoming supporter of His nation, otherwise; He will prepare them by causing to know His Sayings and planning to stand against you. His teachings and speeches are contrary to public peace. After some days, there will be blood-shed and the people will grip up their loins to rebel openly.

Therefore, they came unto Pharaoh and said: It is quite against the expedience if Moses (peace be upon Him) is put off free. He will uplift His nation within a few days and they will make mischief in the land. They will become brave and begin to slaughter, beat and quarrel. And Moses (peace be upon Him) will lead them to stop worship of your nominated gods and from your slavery. It is necessary to plot any scheme against Them. Pharaoh said: We have a trick already, with which we made the Children of Israel dead earlier. Now we shall do that again: that is; we shall slay their sons and spare their women. Doing so, they will never be able to stand against us. Whom Moses will excite then to rebel against us? You know that we control the government. The people follow our indications.

Pharaoh said: then I shall crucify you every one 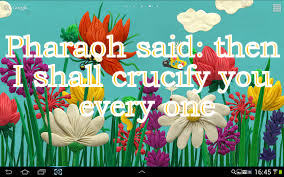 126.  And thou takest vengeance on us only for as much as we believed the tokens of our Lord when they came unto us. Our Lord! Vouchsafe unto us steadfastness and make us die as men who have surrendered (unto Thee).           124.  La-‘uqatti-‘anna  ‘aydiyakum  wa  ‘arjulakum-min  khilaa-fin-  summa  la-‘u-salli-bannakum  ‘ajma-‘iin.

It was described in the previous verses that the wizards, collected by Pharaoh, were defeated by Prophet Moses (peace be upon Him), but even then, for inspiring with awe, he rebuked the wizards taking courage: If I am Pharaoh! Surely I will punish you very severely due to your revolt.

It is commanded in this verse that Pharaoh addressed the wizards: I will have cut off your hands of one side at first and then feet of your alternate side. And after that, I will crucify you surely. The wizards replied to Pharaoh: Certainly we will return unto our Lord. Every living being has to die. If the death comes by means of your hands, thus, we are ready. Your punishment will torment and be pitiable for a while. After that, when the soul is gone, then there is peace and tranquility. The death is certain for you also. But such peace and tranquility will not be for you.

Therefore, you should do that what you desire to do. We are totally innocent. You are going to be angry with us because we believed in our Lord after looking those open tokens, which He (God) has shown us through Prophet Moses (peace be upon Him). No fair individual can ignore except accepting the Truth after beholding. There is neither any reason of taking this matter ill nor you have any right to be angry on it. But if you have been ready to tyrannize us, you will suffer. We pray from the Omnipotent God: Our Lord! Vouchsafe unto us steadfastness and patience, so that, this torment of sometime become easy for us. Our Lord! We have pleaded now that the doors of patience be opened upon us, so that, our steps should not stagger from Your Path, and we should leave this world accepting Your obedience and having belief that You are our Lord. Confusion should not occur in our Belief due to pain and ailment. And we should attend Your Court being Your obedient (make us die as men who have surrendered unto Thee).