Prophet speaks concerning God nothing but the Truth 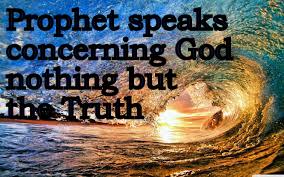 105.  Approved upon the condition that I speak concerning Allah nothing but the Truth. I come unto you with a clear proof from your Lord; so let the Children of Israel go with me.   104.  Wa  qaala  Muusaa  yaa-Fir-‘awnu  ‘innii  Rasuulum-mir-Rabbil-‘Aalamiin.

Haqiiqun – (approved, constant), this word has been derived from Haqq. Haqq means “right, true, God, justice, truth, reality, firm, fact and gist”. In this verse, last meanings have been taken, that is to say; I cannot turn from this fact that I should deliver the Message of Allah Almighty to you as it is. My selfishness, falsehood or advantage should not just interrupt.

Till now, circumstances of Prophets Adam, Noah, Hud, Salih, Lot and Shu-aib, from the Previous Prophets (peace be upon Them) have been described in this Chapter (Surah). These People (peace be upon Them) had come for removing the specific evils from their personal nations and tribes separately. And because the root of those evils was that the people had forgotten the concept of Real Lord (God Almighty), so They used Their attention to remove that specific evil, which had established into Their nations, after teaching them essential education of Monotheism.

Those happenings begin from this verse, which were faced by Moses (peace be upon Him) at the time of fight against Pharaoh. It is commanded that Prophet Moses (peace be upon Him) came unto Pharaoh with the Message of Allah Almighty and said: I have been sent by the Lord of this world and am His Messenger. It is my duty to convey His Message up to you correctly. There will be no mistake, adulteration or temperament from me side. I have clear proofs of my Prophet-hood, after which, there should be no doubt in my truth. O Pharaoh! Give up those tyrannies, which you have oppressed upon the Children of Israel and let them go with me, so that I may colonize them in their actual native land and teach them “how to live like humankind”.