The nature of the consequence for corrupters 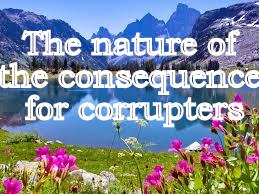 ‘In – (in fact, not only so), usually, the meanings of this word come for “if” and as per Arabic language; it is used as “(on the) condition”, but here, it aims “in fact, really, indeed”, because actual form of this word was ‘innahuu.

Zalamuu – (they repelled), this word has been derived from Zulm, which means ‘tyranny, oppression, not to pay the right of anyone, and if an individual is not treated properly as he deserves’. Here, it aims that it was right of these verses that these would have been accepted as true and correct, but these were not accepted, so it means “those people repelled, drove back or resisted against them”.

It is commanded that two matters were common among all those disobedient nations, circumstances of which have been described so far, and due to adversity of which, they could not reap advantages from the Guidance of Prophets and Messengers (peace be upon Them).

Allah, The Most High; commands: We found most of those people involved in breach of promise, and maximum from them were fearless in committing evils and disobedience.

The commentators of the religion have explained the meaning of covenant as: The covenant “when God Almighty collected the entire souls of (every) humankind before creation of Adam (peace be upon Him) and asked from them “Am I not your Lord (‘Alas-tu bi-Rabbikum)? The souls of mankind replied: Balaaa (Yes! You are our Lord). This was the covenant, which was made by every human being’s soul, they promised that they will obey the Commands of their Lord in the world, and which is being described again and again, further detail of it will be discussed in forthcoming lessons.

Or the covenant mentioned in this verse aims; which the disobedient people used to make with their Prophet (blessing on Him) when they were punished. At that time; they used to say: We shall never disobey the orders of God Almighty in future if we are saved from this wrath at this time. And whenever the wrath was postponed, they used to either forget their covenant or break it intentionally.

Moreover, the sense (meaning) of the verse is common and every human being; who is not committed to his treaty in the world, is included in it. It makes sense that foundation of immorality and being criminal is; that an individual is not bound of his covenant.