Ye have no other God save Allah 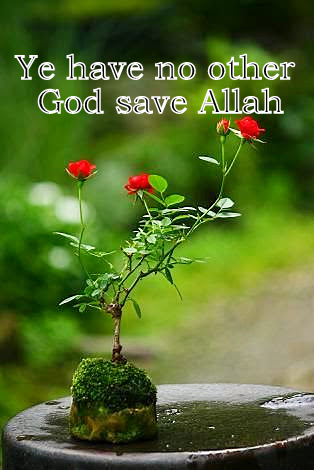 Mad-yana – Some commentators of the religion think that it is name of a place. But maximum commentators say that it is name of an honored person, whose children were called by his name “Madian”, as ‘Aad and Thamud are names of two individuals. Then their all children were famed as ‘Aad and Thamud. Their native land is in the territory of Jordan too.

It has been described already that the nations of Noah, ‘Aad, Thamud and Lot deserved the wrath of Allah Almighty due to being fallen into adversity of their criminal lifestyle. And because, save some number of individuals, entire people were obstinate on their evil habits, Allah Almighty indicated one force from the system of His servant forces. And that force ruined them.

After that, era of Madian nation came, circumstances of which begin from this verse. It is commanded: We sent Shu-aib (peace be upon Him), who was an esteemed person and had relationship with the Madian tribe, by appointing Him Our Prophet, unto His nation to cause to understand them. They had forgotten their Creator, Lord and God; Allah Almighty.

Prophet Shu-aib (peace be upon Him) warned them: O my people! That is only Allah (Eminent, Glorious and Dignified), before Whom, everyone should bow with the humility. None is worthy of worship save Him. Observe Me! You will find such tokens in My character, discourse and walk, which will give evidence that I am true and sincere. Your Lord has sent Me with such Revelations, observing and listening to which, you should not have any doubt in My truth.

Circumstances of which nations are being described, a special kind of evil had become prevalent into everyone of them, but the foundation of all of them was one, that is to say; forgetting Allah Almighty and inclining towards other things. These other things are nothing but own evil desires, which appear in the form of different kinds of wicked deeds.