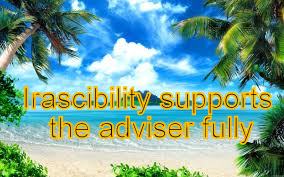 If someone becomes accustomed of any ill-mannered act, he does not have any reply to satisfy the individual, who is going to cause to understand him. Particularly while the act is highly disgusting and the aim of wrong doer is to tease someone else necessarily, he can say nothing as answer save an ugly and irrelevant word.

The talk of that person, who advises the adulterer, is felt so much blushing by the evil doer, who commits an act, which is inhumanity and contrary to reason, then he can do nothing except being ashamed and displeased. The best part of his inner self gets ready to quarrel with himself and reproaches. This part is his irascibility, which supports the adviser fully. And if the criminal has not choked his senses entirely so far, he may return towards the straight path with two or three harsh jerks of advice. But if his conscience has died then the best talk of the adviser seems him deadly poison in spite of being an antidote.

It is clear from the answer of the nation of Prophet Lot (peace be upon Him) that they had lost their senses. They determined the external and internal chasteness and cleanliness as a dangerous vice, which did exist into Prophet Lot (peace be upon Him) and His believers, and which was a best attribute of human being, whereas, they gave preference to their impurity and obscene act contrary to the chastity. It appears that their wisdom had been turned over entirely.

It is commanded that the nation of Lot (peace be upon Him) had no any definite answer and began to talk with irrelevant. When no answer is seen by the human being, he begins to abuse reciprocal and even does not miss beating. Therefore, if someone is using insulting language or being prepared for beating, then one should understand that he has been defeated by his opponent in the field of wisdom, and does not see his freedom in anything save abusive behavior and quarreling. Brawl and scuffles is hundred percent sign of defeat. The people of Lot (peace be upon Him) were annoyed from His preaching and said: Turn them out of your township and from among you.

This result comes out from it that the individual, who gets ready to punish any exciter of any matter, for example; beat, exile or imprison, then it should be considered that the exciter is true and that person, who is going to give him punishment, has accepted his defeat in debate, otherwise, if he would have anyone argument or proof of his truth, certainly he would have produced it and admonished to his opponent.