A token of God was a she-camel 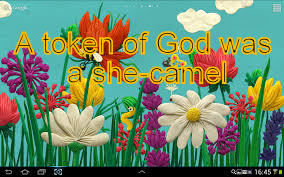 Samuuda – it is name of a nation, which lived in that central area between Yemen and Hejaz, name of which is Hajar. After the destruction of the tribe ‘Aad, prosperity was acquired by this nation. These people were of strong stature, tall and healthy also like the people of ‘Aad. And those entire evils had been spread into them too, which exist in the proud of power.

Saaliha – He (Salih) (peace be upon Him) was a good-natured individual of the same nation (Thamud). Allah Almighty chose Him as His Messenger and appointed Him to admonish the people of Thamud.

It is commanded by God Almighty: We sent a Man { Salih (peace be upon Him)} towards the nation of Thamud, Who was from their relationship, to admonish them. He (peace be upon Him) caused to know them that they should worship Allah. Save Him there is none worthy of worship for anyone. He (peace be upon Him) said: the token, which you wished, Allah Almighty has sent. Now there should be no reason of any doubt to you in My Sayings. That token is this she-camel, which has come out from the mountain with the Omnipotence of Allah Almighty before you. Let her feed in the land freely. Behold! Touch her not with hurt. Allah Almighty has entrusted her to you. Your safety is in her safety. If you afflicted her, it would not be well for you. You would be punished very severely.

Allah Almighty says: We kept Hud (peace be upon Him) protected and those with Him by a mercy from Us, from that disaster. But those people who did neither use to believe in Our Tokens and Revelations beholding them obviously and nor accept Us as their Worshipped, and they were involved in polytheism (belief in a plurality of God), therefore, We cut their root.

Some one or other misfortune use to come in the world usually. Some of them are ordinary, whereas, some are alarming. Dust, storms and earthquakes etc. are customary, which occur due to mutual pulling and taking away by natural forces. If the human being does not arrange to be saved from those calamities before time, then he is annihilated entirely after coming in their entanglement like lifeless things.

We have come to know from it that it is incumbent for the humankind that he should adopt practical managements for being saved from the disasters. Holy Qur’aan explains that production of horrible accidents is necessary due to either gravitational collision of natural forces or mutual amalgamation into one another with a specific manner.

Along with it, the prudent people use to admonish the human beings; the ways “how to be safe and sound from them” from time to time. But from them; matured talk is of those individuals, who are called Messengers (peace be upon Them). Their first duty is that they strengthen the heart of the mankind, so that it should not be confounded at the time of any calamity. They (peace be upon Them) say: Believing in Allah Almighty and having complete faith in His Mercy is the actual thing.

That individual who do not have trust in Allah Almighty and is deprived of the Belief and the Faith, and instead of it; he has trust in his own strength, own people, companions, buildings, fortresses and weapons etc. (apparent equipment and property etc.), and do not act upon the advice and guidance of the Messengers (peace be upon Them), neither can he be saved from oppressive worldly mishaps and nor can he remain in peace after death. It is known obvious from this detail that personal evil deeds of the human being, which are not according to the Guidance of the Messengers (peace be upon Them), make him victim of the disasters. And because he is debarred from the satisfaction of the heart; being a disbeliever, so even he will never enjoy the ease of the Doomsday.

Main object of learning the lesson from the circumstances of earlier nations, which Holy Quran explains before us, is that the humankind can escape from the calamities of the world and the anguish at the time of death, when he will follow the Guidance of the Messengers (peace be upon Them) of his own life time as now Muhammad (grace, glory, blessings and peace be upon Him) is the last Messenger until the Day of Resurrection. Except it; there is no any other form of being saved.