We (all people) should keep away from evil 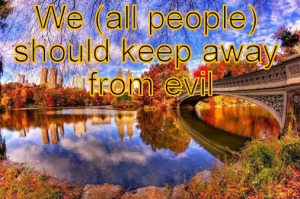 Zikrun – (a reminder), zikr means “to remind” and that thing is called zikr also, by means of which, someone is reminded through a verbal reminder or a letter etc. Holy Qur-‘aan is a Zikr too and entire Revelations of Allah Almighty, which His Messengers (peace be upon Them) brought unto the human beings, are Zikr. Because by means of them, those promises are reminded, of which, the mankind has taken promise from Allah Almighty before his birth that he will do as promised. And in which there is betterment from beginning to end for the humankind.

La-‘alla  – (haply, perhaps), this word discloses strong hope regarding happening of anything, which is called “Expectation”.

It is commanded that Noah (peace be upon Him) asked from His people: Do you say me a liar and consider it a marvel matter that the Revelation is revealed from your Lord upon a man, who is like you and an individual from you, and His only object is that He warns you by means of that Revelation from the result of adopting the way against humanity, and due to fear you should begin to be saved from evil deeds, and then there may be a strong hope that you may find mercy?

Purpose of coming of the Messengers and Prophets (peace be upon Them) in the world has been explained in this verse. It is duty of the Messenger that He should come unto the human beings along with the Message of Allah Almighty, as well as He should also be a mankind. The Prophets’ physical and spiritual powers have this balance and equilibrium that with those powers They (peace be upon Them) become able to guide other entire people. This balance and equilibrium in the Messenger is natural and by birth. Any attempt or profession of any individual has no access in it.

The Messenger (peace be upon Him) is an example of good conduct for the human beings of the world. He does never commit any such work which is harmful for the humankind. His only job is to frighten the people from the result of evil deeds.

Only that individual can forbid any person from doing bad who escapes himself from it, otherwise his own deeds falsify his own sayings. Then how would his conversation be effective? Certainly those people will begin to be saved from wicked deeds due to the warning of a Messenger (peace be upon Him) who are sensible. And they will deserve the Mercy of Allah Almighty. The sign of God’s kindness in the world is that Rule of Safety and Peace is established everywhere and the heart of everyone be satisfied. Nobody afflicts any other. The people feel happiness when they perform good work and support one another to become good.