Reply by chieftains of Noah’s nation 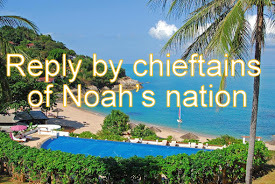 It was discussed in the previous verses that Allah Almighty says: We have arranged to bring the earth to life through raining for humankind’s apparent and physical life, so that vegetables, fruit and grains maybe produced from it and food may be provided for the body of human being.

From here, this description begins that (Allah Almighty explains): Similarly We have arranged for mankind’s hidden and spiritual life and We have sent Our Messages unto human beings through the Messengers and Prophets (peace be upon Them), which are like the rain for bringing their souls to life. If they will act upon those Revelations, their souls will become verdant, green and prosperous as the earth with rain, but some souls are entirely like barren land, as the rain is never useful for them.

It is commanded that the Children of Adam along with Him and His wife – Eve (peace be upon Them), who were sent down on the earth for dwelling, they carried on going the straight path, prescribed for them for a long time. But after some period they began to go astray. Then Allah Almighty sent unto them Prophet Noah (peace be upon Him) as His Messenger, He caused to understand His nation and preached: Behold! Worship God only. There is none your worthy of worship save Him. If you chose others as worshiped leaving Allah Almighty, I fear that on the Day of Resurrection, which is a very Awful Day, you will suffer very painful Doom and retribution.

The Commentators explain that Adam (peace be upon Him) had declared before His children that: Satan has caused to come us out from the Garden, and Allah Almighty has admonished us that: If you worshiped Me only after knowing Me in the world and did not ascribe any partner with Me, then after death, on the Day of Judgment, after counting your deeds, the successful people will be entered into the Garden again. It manifests that there are two Pillars of the Religion:

The Children of Adam (peace be upon Him) kept their footing on the Unity for a long time and many individuals of higher dignity were born into them. The common people were so much attached to them that after their death, they made their idols and began to worship them. Therefore, Messenger Noah (peace be upon Him) was sent to admonish them.