How God will bring forth the dead human to life? 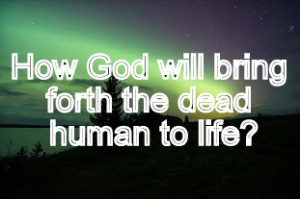 ‘Aqallat – (bore, burdened), it is past tense, origin of which is ‘iqlaalun. This word has been derived from qillatun. Actual meaning of it is “to be less” and its opposite word is kasratun (to be more). Many words are made from it as “’aqli-yat, qillat, qaliil etc.” After that, its meaning became “to burden, to bear”, because any loader will lift anything at that time, when it will consider the load less than its capacity. In this meaning, the word ‘iqlaal is used, which means “to bear”.

One more word ‘istaqlaal also has the same meaning, that is to say; to pick up own weight at one’s own, and consider it less, whether it is heavy, and without getting support in this matter from any other. In this verse, those things regarding rectification of the earth have been mentioned, which Allah Almighty has fixed with His Omnipotence, and in which any mankind cannot interfere.

It is commanded: Behold! In what manner Allah Almighty has arranged to rain on the land with His Mercy? At first, the pleasant winds blow. Then those winds bring the clouds collecting from hither and thither. After that, Allah Almighty showers down the water on the earth from it. Resultant, delicious fruit and beautiful flowers come out from the land after raining.

Think over it and you will come to know that as Allah Almighty brought the dead land to life with His Mercy causing to rain the water, similarly, He will bring to life the human beings after death. Being dried or parched of the land is just like its death.

You see that Allah Almighty brings it to life again through the rain, in like manner, He has such sources, with which, the dead humankind will come back to life and after being alive, the human beings will acquire reward or award against their good or bad deeds.

But remember it that: Reap advantage in this world from spiritual rain, which Allah Almighty poured down through His Prophets, Messengers (peace be upon Them) and Holy Scriptures, if you wish to prosper (bud and blossom).