The Throne of God 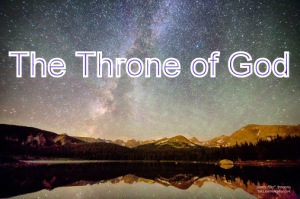 This description has already been being stated that everybody will know after death that his/her Lord is Allah Almighty and He had sent down His Messengers (peace be upon Them) along with His Scriptures (the Word) for the guidance of human being. That all was correct and true, whatever the Messengers (peace be upon Them) said and whichever was written in the Scriptures. But believing at that time (in the Day of Resurrection) will not be useful.

Those people will be kept in the Garden for dwelling, who recognized their Lord and obeyed Him in the world, whereas those who were disobedient, will be sent in the Fire of the Hell. With effect from this Section, which description begins, that is: How to recognize our God in this world?

Our Lord commands: look at the heavens, the earth, the day, the night, the moon, the sun, and the stars, and think that: How the system of this world is set up in order, established and organized in the best manner? Has it been established itself?

No! Nothing can happen itself. A Creator of all these things, keeping them under an established system properly and completing them step by step, slowly and gradually, exists, that is One – Allah Almighty, Whom we can’t see today with human eye.

Moreover, observing His Tokens and Signs, we can understand with sense and wisdom that He exists and certainly He is Existing. These entire heavens and the earth, created from the matter by Him, were completed after a long time and were set up at their proper places.

The term of creating these things was six days, however those were not the days, which are determined by the sun, but measuring scale of those days is something else. The Day, the night, the sun, the moon and the stars appeared slowly and gradually. Measuring of the days, when the skies and the earth were created, does not depend on them.

Different but regular movements of these entire things depend on the Command of Allah Almighty. From them the days and the nights come running one after one, and these all are obedient and submissive to the Commands of Allah Almighty. We should know our Creator by meditating in all these things and believe in Him unseen, so that we may be saved from His wrath of the Day of Resurrection.