Reward of Believers and those who do good works 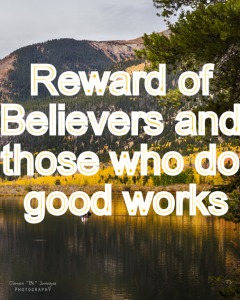 naza’-Naa – (We banished), actually it is past tense from the word naza’. Naza’ means “to take any congealed thing out by pulling”. Here it aims “to remove”.

Gillin – (rancor, malignity, implacable enmity, deep seated hate, jealousy, malice etc.), it aims in this verse that no rancor will remain in the hearts of the rightful owners of the Garden against one another, as it has been described earlier about the rightful owners of the Fire of Hell that they will enter in the Fire of Hell – quarreling with one another all together.

It has been explained in these verses that those people who considered Our Revelations as the Truth and obeyed the Messenger of Allah Almighty (grace, glory, blessings and peace be upon Him), followed His Guidance and performed good works, they are rightful owners of the Paradise.

Meanwhile, it was told by Allah Almighty also that those works which We have mentioned in the Holy Qur’aan, required to be done, are not too much difficult. Obeying His commands, performing that what He has ordered and being careful from the forbidden things – these entire works are in the power of every mankind.

Such individual, who intends strongly to live in the limits, prescribed by Allah Almighty and has no doubt in his heart regarding His Promises and Warnings – hidden support begins to reach him/her from Us (God Almighty) and whichever labor he/she bears even a little, that is removed due to Our secret Support.

These people, who have full faith in their hearts that Allah Almighty, His Word (Holy Qur’aan) and His Messenger Muhammad (grace, glory, blessings and peace be upon Him) are True and adopt performing good works, We have appointed them rightful owners of the Garden, not for a few days only but for ever.

Along with it, another special reward will be for the dwellers of the Paradise that if anyone of them had any affliction or displeasure in his/her heart against someone else being human nature, that will be removed from the heart before entering into the Garden. At the time of entering, neither someone will have any complaint against anyone nor unpleasantness. Everyone’s heart will be clean for one another. If it is taken into consideration, we shall know that reason of restlessness of the human being and anxiety is not any other than reciprocal grief, remaining afar off one another, spite, jealously, obstinacy and enmity.

If absurd passions do not exist in the heart of a mankind, which are called desire, abomination, malice and spite etc., then there is no reason of his/her distress. It is very difficult for the human being to get rid of it entirely. However, the hearts of those people, whose abode will be Paradise, will be cleaned from all kinds of impurity and then they will come to know about the real happiness.

Requital of the worldly deeds 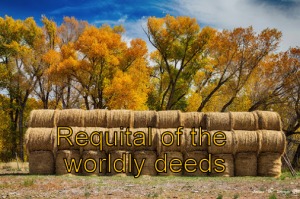 Ga-waashin – (coverings), actually this word is Ga-waashii and plural of Gaashi-yah, which has been derived from the word Gash-yun. Gash-yun means “to cover something”. Gashi-yah means “Covering” – a thing used to cover something.

It has been commanded in this verse that negligence and carelessness from the orders of Allah Almighty, opposing the way – led by the Messenger (grace, glory, blessings and peace be upon Him), persistence on evils, sins and wicked deeds etc. these entire errors will appear after death in the form of the Fire of Hell, and as they had been sticking to bad works in this world, there, similarly the Fire will be clinging to them. There is no form of their reaching Paradise because of their wrong deeds.

It is commanded that those people who falsified Our Revelations in the world and said that These are self-invented, and rejected Our promises and Warnings regarding Reward and punishment, scorn the decisions of these verse against their own false decisions, for them, neither the gates of Heaven will be opened, nor will they enter the Garden.

They used to say in the world that supposed names of the Paradise and the Hell have been made-believe for entertainment and frightening the children. Now they have no right to enter the Garden after death. They are fallen into their haughtiness and consider themselves greatest, and think it the Words of low level, which have been described in the verses of Holy Qur’aan regarding the Paradise. These kinds of their thoughts are not reasonable for them because they are a creature of Allah Almighty as others and possess the dignity of His Viceroy on the earth.

If a picture of such type of imagination is drawn, that will be exactly as though; they are a camel and the gate of the Paradise is an eye of a needle. This instance can be the best example regarding bigger and smaller. Now if they went into the Paradise, it will be as though; that the camel passed through the eye of the needle. As you know; it is impossible. The camel can never go through the eye of the needle.

Similarly these people, who consider that they are grandeur, and think about Paradise that it is a little word before their dignity, cannot enter. Allah Almighty says: it is Our Way of punishment to the guilty that We change their credence in the form of agony. Those people, who have fixed firmly in their mind the false ideas of living in the world, and they consider that the Commands of Allah Almighty are nothing against their thoughts and traditions, and they say: We don’t like these faiths and we have advanced and gone very forth from the Believers of the religion, their false thoughts will become the Hell for those people and they will be punished according to their thoughts.