When death comes, everyone is confused 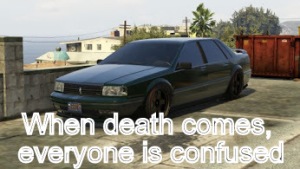 Yanaalu – (will reach, will be given), this word is from yanal, which means “to acquire, to reach”. Yanaalu will be meant “shall be given to them”.

Kitaab – it means a written script. Here it aims “Lawhum- Mahfuuz” (Such Protected Table or Board on which, the destinies of the world since its creation are written), every that thing has been mentioned in it, which is given to every human being.

RusuluNaa – the Messengers (peace be upon Them) sent down by Us (Allah Almighty). Rusulun is plural of Rasuul. This word is an adjective tense, which has been derived from Risaalah. Risaalah means “to send). Rasuul means “sent, Messenger, Apostle”. In this verse, it aims the Angels (peace be upon Them).

It has been described in this verse: Who would be big loser than those people who perceive the Revelations of Allah Almighty as mockery and a joke? It is commanded: that, which these people say! It is the command of Allah which has been given to us and which are we doing, whereas that is wrong and a lie, which they are telling.

They consider that the verses of Allah Almighty are compositions invented by the mankind, whereas they are wrong. These people are destroying themselves. Their appointed portion of the Book of destiny will reach them, either that will be trouble or ease.

Then, whenever the time of their death will reach and the Angels of Allah Almighty (peace be upon Them) will come to take their soul, at that time their senses will be lost, everlasting calamity and retribution will come before their eyes. The Angels (peace be upon Them) will ask them: Where are those people, idols or your those ill-founded and destructive hobbies today, in which you had been entangled and to whom you used to call upon beside Allah? At that time, they will answer being confused: Really neither we see anyone from our protecting friends and supporters and nor have we remembered now those amusements and playfulness, with which we used to cure our miseries, grieves and afflictions.

At that time they will be sure that neither there was any supporter except Allah Almighty and nor any other can be, and that, verily they were disbelievers and on the wrong path.