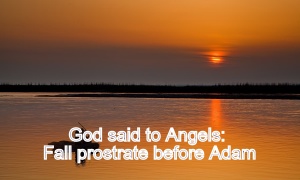 It was told in the previous verse: O Mankind! You were appointed as chief over the entire creature on the earth and put it in your possession, and powers and strength were bestowed upon you as per its requirement. All those things were created in the earth, which were necessary to establish your life. You should use the powers to get those things. In the external world, the entire remaining powers are your obedient and submissive except One Power. More detail about it has been described in this verse.

It is commanded: We ordered the ingredients of the matter to be combined, for creating you, then by connecting them in configuration, We fashioned the mankind. It will come in the next Chapters that “Then We caused to enter Our Spirit into it, after that We said to the Angels: Look! This is Adam, Who is father of entire human beings”. Fall you prostrate before Him.

Listening to this command, all the Angels (peace be upon Them) fell prostrate, but Iblis (Satan), who was standing with them, did not partake among Them who fell prostrate. And his act of denial separated him from the Angels, whereas, verbally, He used to say to Allah Almighty, “My Lord and Allah”, but due to disobedience, He was outcast.

The birth of Adam (peace be upon Him) has been mentioned earlier in the third Section of Surah ‘Al-Baqarah. It has been told there that “Allah Almighty has appointed Adam as His Own Vicegerent”. Choosing Adam as Viceroy, His children became viceroy too. This mention has been made in the last verse of previous chapter i.e. Suratul ‘An-‘aam, and it has already been explained there.

Here, the aim to tell the story of Adam (peace be upon Him) is that the human beings should be acquainted with the enmity of Satan completely and be warned properly that they are most powerful in the world. They can inflex the things of the world as they wish by means of their internal virtues and abilities. Entire external powers are their servant and obedient, but one power has denied to be their servant and obedient. Due to this reason, it has become compulsory that they should be guided to remain attentive, so that they may understand that when they will spend their powers for their betterment, there is such a power, which will say/misguide through guile, by flattery and threatening, to spend their virtues, according to his instructions, as it might be possible, due to which they will suffer instead of reaping advantage. Therefore, they have been informed properly that they should not use their powers in accord with the commands of Iblis. He (the Devil) is their enemy, who will try his best to ruin them. The mankind should use his powers according to the Commands of Almighty Allah, Which have been revealed in the Holy Qur’an.