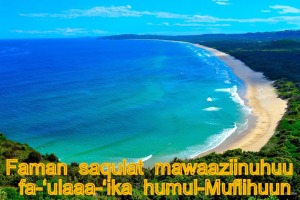 Mawaaziina – it is plural of mawzuun, which has been derived from the word wazan (weight). Mawzuun means the thing which is weighed. Mawaaziina is plural also of the word miizaan, which means “the scales”.

Yazlimuun – it is from zalama, which means “to seize and hold without right, to violate one’s right”. Violation of the right regarding the Verses is that those (verses) are not believed in (denial of the Revelations).

It was commanded in the previous verse that the people will be questioned on the Day of Judgment: The Messengers of Allah Almighty (peace be upon Them) had come unto you. Did you obey Them or otherwise? And the Messengers (peace be upon Them) will be asked too by Allah Almighty: Did you convey Our Message to the people? Then exactly True Reality of good and bad acts and deeds of the people will be manifested before everybody.

It is commanded that the weight will be estimated entirely and correctly. He/she will be successful and will get deliverance, whose good deeds will be weighty than other side of a pair of the scales, whereas whose good deeds will be light, they will face failure and calamity, because they did not act in the world in accord with Our (God’s) Guidance.

The aim of causing to understand from this verse is that nobody can estimate the value of one’s those activities and deeds, whichever are done by any individual in the world, whereas everyone should examine every work of own before performing or committing it according to those Principles, which have been described in the verses of Holy Qur’aan, and which have been cleared by the Messenger of Allah Almighty (grace, glory, blessings and peace be upon Him) significantly.

Nevertheless, that person who does not examine own activities according to the prescribed standard mentioned in these verses, but performs or commits good or bad deeds as one desires, he/she should know that an account of entire activities will be taken, and those will be weighed in accordance with the principles of these verses.

In the world, aforementioned prescribed standard is hidden in these verses. You would have observed and examined before performing or committing any deed on its touchstone, but you did not try. On the Day of Judgment, these all verses, which are sources of testing the deeds, touchstones, standard and measuring instruments, will appear in the form of a pair of scales. And every individual will see clearly the weight of own acts and its value.

These pair of scales, touchstones and measuring instruments etc. are the sources for knowing the cost and value of anything in the world, so the Commands of Holy Qur’aan will appear on the Day of Resurrection in a perceived form, which have been named as Miizaan (A Balance, A pair of Scales), so that we may understand it easily. This Miizaan is actually the Commands, Principles, Rules and Regulations of the Holy Qur’aan, with which, we had to examine our deeds and works during our stay in the world. These will be formed there in such significant and feeling shapes, by which, none will remain doubtful a little bit to know the value and cost of one’s acts and deeds.