God’s terror came unto evildoers when they were senseless

5.  No plea had they, when Our terror came unto them, save that they said: Lo! We were wrongdoers.

7.  Then verily We shall narrate unto them (the event) with knowledge, for We were not absent (when it came to pass).   4.  Wa  kam-min-qaryatin  ‘ahlak-Naahaa  fa-jaaa-‘ahaa  ba’-sunaaa  bayaatan  ‘aw  hum  qaaa-‘iluun. 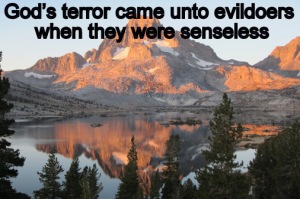 Qaaa-‘iluun – {(they) slept at noon}, this word is plural of Qaa-‘ilun, which has been derived from Qay-luulatun. Qay-luulatun means “to sleep at noon. There is another word “Qaawal”, which is used for him or her, who says something, and it is made from “Qawl”. But according to the Arabic principle, both words are spoken “doer, operator, (gram) Subject. Therefore, its meaning can be known by reading the dictation, which is before and after this word.

Messenger of Allah Almighty (grace, glory, blessings and peace be upon Him) was commanded in the previous verse that He should frighten the opposite people that they should follow the Revelations mentioned in this Scripture (Qur’aan). In this verse, condition of those people has been described, who did not obey the Sayings of God’s Messengers (peace be upon Them) and a sudden terror came unto them in the form of a raid, so they could do nothing to save themselves.

It is commanded: We have destroyed many townships due to disobedience, carelessness and negligence of the people dwelling into them because there was no form of their being correct. They used to remain busy in games and play thoughtlessly, and sleep spreading their feet with comfort.

The terror of Allah Almighty came upon some of those people, who were senseless at night and it pounced some of them, while they were sleeping at noon. At that time they screamed and cried, made a noise of their expression of suffering, distress, pain and grief. Every one of them was saying nothing but that: Alas! Lo! We were tyrant and wrongdoers. We remained involved in negligence and evil deeds. We did not know that the consequence of our wicked deeds would be as it was. But at that time, the repentance was not useful.

There was no reason with them to be entangled in the negligence and committing sins before it. They were told the Straight Path. The Messengers and Prophets (peace be upon Them) had come unto them). Allah Almighty says: Verily We shall ask from all of them about it. We shall question the wrongdoers: Tell Us now! Why did you not obey the Sayings of Our Messengers (peace be upon Them). And We shall ask from the Messengers: Whether did you deliver Our Message to them or otherwise? Then We shall tell them clearly: We know your perverseness also as well as the state of the Messengers (peace be upon Them). Neither You were hidden from Our Vision and nor We were absent ever from you. Take it! It is the proof of your evil deeds. Now you will be punished as retaliation of your wrongdoings.