You should not follow other ways save the Straight Path 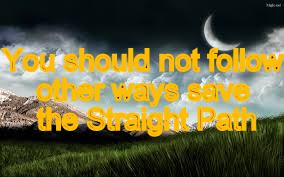 Those commands, which have been described, in that connection, some more orders have been mentioned in this verse. It is commanded that believing in Allah Almighty is, as though, fulfilling the covenant that we shall obey Your (God’s) entire commands without any dispute. It cannot be so, that one believes in Allah Almighty, even then, disobeys Him. Actually that person has not believed in Allah Almighty, who disobeyed Him. That individual took responsibility to obey, who believed. So you should fulfill this covenant.

It is learnt from this verse that the Muslims should be saved from their mutual dissensions because one Religion and one Path has been fixed for them and they have been guided to remain firm on It. If they differed, then it is clear that they all will go separate paths instead of adopting One Path. Support of union and badness of division comes out from this lesson.

In above three verses, principles of successful life have been explained for the mankind. When you will recite these blessed verses, you will have no doubt in it that “if the sense of humankind does not work in the light of these verses, then it can do nothing except that it goes in the darkness catching the finger of Satan.

It is the only way of deliverance of the human life from calamities that he should go Straight Path with complete belief. These are the entire rules of human culture, upon which, human perfection, mental, economic, collective and political development depends. The commands have been described in the verses along-with their aims itself, which are as under:

La- ‘allakum  ta’-qiluun – (in order that you may use your sense and wisdom).

La- ‘allakum  tazakkaruun – (that haply you may learn entire matters regarding your own goodness).

Summary of it is appended below: