Discerning the Commands of God 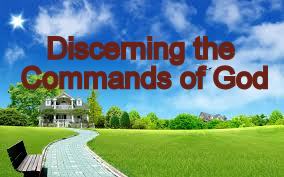 Harrama – it is past tense from tahriim, which means “to forbid”. That thing is also forbidden, safety, respect and reverence of which is compulsory. It is the aim of harrama here, that the thing, which has been commanded to be kept safe respectfully.

wassaa-kum – (you have been advised). This word is past tense from tawsiih, which has been derived wasii-‘atun. Wasii-‘atun means “the matter of sincerity and goodwill”. Tawsii-‘atun means “to say or give something for goodness”. While Wasii-‘atun is from Allah Almighty, then it is meant “to command, to order”.

Remaining prescribed commands of Allah Almighty have been mentioned in this verse. It is commanded that you should not be close to the lewd things and evil matters, whether, those are open or concealed. Protect and respect the life, which Allah Almighty has commanded, that is to say; the life of mankind. You should not kill him/her unjustly. Unjustly killing is that, which has been prohibited by the Divine Law of the Religion. You have been commanded by Allah Almighty about these matters for the purpose that you may understand, that your job is not to set the rules of order and conduct, rather you should follow the commands of Allah Almighty.

It had been the custom among the Arabs that open evil deeds were forbidden i.e. adultery etc. but if those are concealed, where none is present to see, then there is nothing wrong. In this verse, those people have been commanded: The sin and evil is prohibited in each condition, whether that is committed before other people or secretly. Likewise, slaying the man had no objection in the Arab. Vandalism was their left hand game. They have been prevented to do these kinds of deeds in this verse. It is not permissible to kill any human being unless the Religious Law does not provide a Judicial Decree. Similarly, slaughtering any creature in the Sanctuary of Makkah is also unlawful.

After determining the rules regarding affairs and conduct, Allah Almighty has admonished that the mankind cannot make the rules of his life to live at his own. He should follow only the rules established by Allah Almighty and pass his life according to His commands. Every deed of the human being becomes worship, if he/she passes the life in accordance with the commands of Allah almighty.