Follow not the whims of those, who deny God’s Revelations 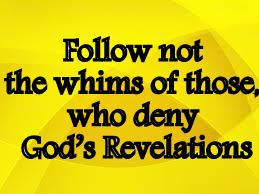 Halumma – (Come, bring), this word is a noun, which has been used as the meaning of “the Command”. There are some such words in Arabic language, which are Noun, but their meanings are of “act of command” or the past. Such words are called verbs of noun.

It has been told in the previous verse that they should bring forth any proof regarding those things, which they have predetermined forbidden. Obviously they have no argument except it that they make only random talks. It has been commanded in this verse that certainly, they have no proof. So now, if they have any such witness, then they should come and bring him forth, who may say: Yes! I was present at that time, when Allah Almighty forbade these things. Apparently; they do not have such witnesses too. Suppose! If they produced such witnesses due to their prestige or giving a bribe, then certainly they would be liars, even then you should neither be agree and nor accept it.

Now because, neither they have any witness, nor argument, so it is clear that they follow only their desires and do, whatever they wish to do. You do not have any desire to follow their wills and do as they say. You should never acknowledge the superiority of such people, who try to falsify the Revelations of Allah Almighty. They do not believe in the Day of Resurrection and deem others equal with their Lord Almighty.

We have come to know a very useful matter from this verse, and a necessary issue has been finalized from it, that is to say; we should not obey such people, who do neither belief in the Noble Qur’an with true heart, nor have faith in the Doomsday, and those, who give importance and priority to others and their sayings, equal to God Almighty, but more than Him.

If (God forbid), there are such people among the Muslims, then they do not have any authority to make laws and legal decisions. They are not worthy of making laws or deciding the religious cases.