Allah raised all of us from the seed of other folk 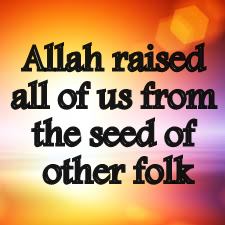 Ganiyyun – (That, Who does not care, the Rich, the careless), this word is an adjective and has been derived from ganaaa. Ganaaa means carelessness. Ganiyyun is that individual who is not indigent of anyone, who has everything of his own.

Yas-takh-lif – (appointing any successor to replace any person or nation), the origin of this word is ‘istakhlaaf, which has been made from khalaf. Khalaf means “after one’s absence”. ‘Istakhlaaf means “after someone, to appoint a successor as his replacement”. That successor is called his Caliph. That person is also a caliph, whom, anyone gives himself, any responsibility to do.

‘ansha-‘a – (brought into being, raised), it is from ‘inshaaa’, which has been derived from nashaaa’. Nashaaa’ means “to be produced”. It also means to write, while the writer writes anything himself by thinking, because he produces a new thing too. Here ‘ansha-‘a means “(Allah Almighty) raised (you)”.

It has been told here: You should not take it as, “Allah Almighty is indigent in this matter that you should obey His command. His system will stop if you will not obey His command as it happens in this world that if, the people do not obey the command of their king and violate his orders, then the king abides nowhere”.

Allah Almighty is neither needy of your worship and obedience, nor has any concern. The Revelations, which He has sent down unto you, it is His Mercy, and it will entirely be better for you if you will act upon His Inspirations. The Plant of His Kingdom does not depend on you that if you will not serve It, some difference will come in His Sovereignty.

If the System of the universe depended on others, Allah Almighty would have removed the disobedient and appointed some other obedient servants as their replacement. It is not difficult for Him to change and remove the present generation and bring some other people to replace them. Look at yourselves! Some other people existed here earlier, where you are at present. They have gone and nowadays, you are from their descendants, who live here. Like this, what is difficult for Him to bring others as your replacement, removing you? You should not consider that you will lurk anywhere being saved from Him, if He desires to remove you. Bear in mind! That which you are promised will surely come to pass, and you cannot escape. Wait for your turn also as your ancestors have gone. You should not take it a warning only.

Thy Lord is not Unaware of what the people do

Muhlika – (the Remover, that, who destroys), this word is “the subject” from ‘ahlaak, derived from halaak. Halaak means destruction, ruin. ‘Ahlaak means “to destroy, to annihilate, to ruin”.

Zulm – (arbitrariness, tyranny), this word comes again and again in the Holy Qur’an and its meaning has already been explained. As per Arabic language, it is used for such a work, which is not suitable and which has any harm either for oneself or for any other. The Way, which Allah Almighty has appointed for the human being in the world, changing a little that Way, is zulm.

It is commanded that Allah Almighty has already established a series to warn the humankind about the forthcoming troubles during future by sending His Messengers (peace be upon Them), because He does not destroy the townships arbitrarily as a punishment while their people are unconscious of the wrong, they do.

At first, He (Allah Almighty) makes it clear that there is only One Straight Way for the humankind. Falling back a little bit form that Way is tyranny and its consequence is destruction and ruin, either that would be in the world or in the Hereafter, or in the both. To manifest it, the Prophets and Messengers (peace be upon Them) were sent by Allah Almighty in the world. The Messenger (peace be upon Him) explains this Way properly by His tongue and shows the people by acting upon it himself. When, all it is done then the human being is provided chance that he should act according to it also. After that, the actions and deeds of the mankind are judged and their ranks are determined in accordance with those deeds.

The humankind should not consider that there is none to ask him, whether he does good works or commits evil deeds. Allah Almighty is Aware very well of his entire deeds. Nothing is hidden from Him. The human being will be awarded or rewarded even for his very little deeds too. He should do thoughtfully, whatever he is going to do and should never get out of the guidance of Holy Qur’an.