The closed and narrow bosoms 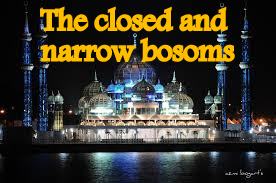 Zay-yiqan – it is a tense of an adjective, which has been derived from the word zayq. Zayq means narrow, vexation.

Harajan – (closed), it is a noun which means – such thick and close bushes and underwood, in which none can penetrate. Here it aims – pressed, much close.

Yassa’-‘adu – it is a tense of participle, origin of which is tasa’-‘ud (actually it was yatasa’-‘ad). Singular of this word is sa’-‘uud, which means – to climb over. Tasa’-‘ud means “to climb pushing oneself forcefully”.

Rijsun – (something unclean, curse, devil, impure, unchaste), here it aims – the curse in the world and ignominy in the Hereafter, that is to say; the curse of the both worlds (during life time and after death).

The temperament and nature of some people in the world desire to move perverse always, whereas, there are some those people, who recognize the straight path very soon. Allah Almighty has set this Rule that the individual, who goes straight forward, is lead and guided properly, and who goes astray, about him Allah Almighty says: We caused to stray him and turned from the Straight Path.

It is commanded that the people, who are good inherently, it must be understood that Allah’s intention is to direct them towards the Straight Path, and to whom Allah Almighty desires to guide, opens his bosom. Resultantly, his bosom accepts the truth very soon.

On the contrary, the person, who is inherently refractory and argues without any ostensible reason, Allah Almighty sets his bosom closed, and then his heart begins to be confused from the true sayings. These people feel too much perturbation and perplexity, as though, they have to climb the height of the sky pushing themselves forcefully. Although, the mountains have some places to foothold, whereas they have to climb straight upper direction without any support under compulsion and with forced labor. After that, Allah Almighty commands: Similarly, We entrap those people in plagues and calamities in the both worlds, who run away from the Belief.