Keep your open and secret – pure, chaste and clean 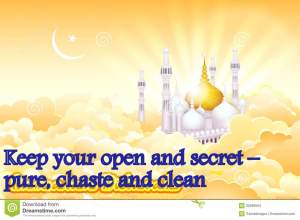 Yaq-tarifuun – (they earn), this word is from ‘iqtaraaf, which has been derived from qaraf. Qaraf means “to gain, to earn, to practice, to work”.

It was discussed in the lessons of previous verses that there are few people in the world who think correctly and do right. Many are such people who have handed over their rope in the hands of their wishes to lead them. They go towards that direction whither their wishes drive them.

The Messenger of Allah Almighty (grace, glory, blessings and peace be upon Him) and care of Him, His nation is being commanded that they should not obey/follow others. They should act upon the commands mentioned in the Holy Qur’aan. Following others will lead them astray, whereas going in accordance with the Revelation of Holy Qur’an is just going Straight Way. The same matter has been caused to understand in this verse through another method.

It is commanded that you should forsake every kind of sin, whether that is open or hidden. Those people who commit the sin, certainly they will be punished for their wicked deeds. It should be well understood.

Those people who are saved from afflicting others, theft, bribe and immorality due to the fear of government only that lest the police seize and the ruler punish them, they are secret sinners and their such act is a hidden sin, because, whenever they will get such opportunity to commit any sin, in the condition that neither the police can observe them and nor the ruler exists there, at that time they will commit the open sin being fearless.

Therefore, it is the form of being saved from the open and secret sin that they should not forsake the sin only due to the fear of the police or the ruler, but the Believer should forsake the sin as it is disobedience of the command of Holy Qur’an. And he should keep himself away from committing the sin during privacy too, because Holy Qur’an has forbidden him. If he did not do so, then he will be punished in above both forms (of sin – open and secret) according to this verse, because the person, who escapes from the evil deeds due to the fear of police or the ruler, actually his heart is a sinner. And if any other person cannot observe his sin, even then Allah Almighty is Best Aware of his sin.

Likewise there is none to prevent the sinner during privacy, but he is breaking the command of Holy Qur’an and Allah Almighty is looking at him. He will punish him properly.

The aim of this verse is that our Lord i.e. Allah (God) Almighty commands us to keep our open and secret pure, chaste and clean. He says that neither you should commit any sin in front of anyone, nor secretly, and neither by your body parts, nor in your heart. Any sin is the sin in all conditions.