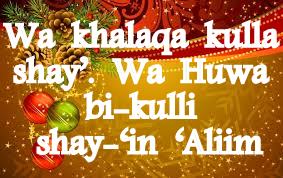 Badii-‘un – (That, Who originates), like Samiii’, ‘Aliim, Khabiir and Basiir, it is also an adjective, and derived from the word bada’. Bada’ means a new thing, which does not have any sample from the very first. The word Bid-‘ah has been derived from it too, which means “that new and curios thing, example of which does not exist in the religion”. So Badiii’ means – such Originator, Who creates any new thing without any specimen. Making such a thing is called ‘Abdaaa’. From the same, the subject is Mabda’, which means “The Inventor of any new thing. That Person, Who has this characteristic permanently, is called Badiii’.

Saa-hibatun – (any female companion), it is the feminine subject and derived from the word Sahab. The source sahab means “to accompany, to live with”. Suh-bat is gotten source from it. Hear Saa-hibatun aims zawj, which means “a wife”.

The attributes of Allah Almighty were described in the previous entire Section, tokens of which are evident in the world. Everyone can know well Allah Almighty, if consider thoroughly these portents. In the first three verses of this Section, some more Beauties have been described, from which, estimating the Divine Power of Allah Almighty becomes easy.

It has been commanded in this verse that Allah Almighty is the Originator of the heavens and the earth without seeing any sample, the Creator of every creature and the Knower of everything. Then talk of those people has been rejected, who say unknowingly that God Almighty has any child.

Allah Almighty commands: How much strange things are – the sky, which you see over your head and the earth beneath your feet? Allah Almighty has originated them without observing any sample. Like this, He has created every little and big thing in the universe and He is the Knower of everything eternally and in accord with that Knowledge, He created all of them.

When He is Able to create everything by saying only one word “Kun” (Be), then, we should say that certainly, everything is His creature. The son, the daughter, who are children of any male plus female in this world, is produced with much strife. A wife is required for it. The children cannot be born without any wife. The wife is female gender of the husband and she is equal to him in every respect.

It is the only difference among husband and wife that he is male and she is female. Whereas, there is nothing equal to Allah Almighty, and nothing has a little similarity with Him. Then how can be His wife? Allah Almighty creates everything with His command, therefore, everything, which exists in this world, has been created by Him, and none is equal to Him.

At another place in the Holy Quran (in Surah ‘IKHLAAS-112), Allah Almighty commands:

(Allah, the eternally Besought of all!)

(He begetheth not nor was begotten.)

(And there is non-comparable unto Him.)