Unless my Lord Guide me, I will become one of the folk, who are astray 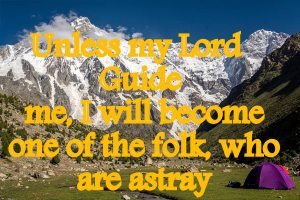 Janna – (covered), it is an active verse, Origin of which is Jannun. Jannun means “to cover, to hide”. The word Januun is production of the same origin, which means “concealment, to disappear, to set, to be hidden”. The word Jinn (demon) has also been derived from it, which is a hidden creature and cannot be seen with human eyes. Here it aims “to conceal in darkness”.

‘Afala – (set, disappeared), it is an intransitive verb, and its origin is ‘Afuul (to set, to disappear, to conceal). The word “’afala” is also from its Subject; that is to say “a doer, an agent, a nominative”.

It was described in the verse of previous lesson # 738 that when Prophet Abraham (peace be upon Him) gave up the idols knowing them useless, then Allaah Almighty brightened His wisdom more and He understood that not only the idols are useless but entire things of the world, whether those look very splendid, are not able of Divinity (to be God), though the people have considered them also god. It was still childhood of Prophet Abraham (peace be upon Him) that He began to think in this Matter. The same has been described in this verse and forthcoming verses.

It is commanded that He (peace be upon Him) saw a bright star in the sky during the darkness of the night. He thought: Perhaps it is God and my Lord. After some time, when it disappeared, His heart decided: Such things which set, cannot be God. Later on, He (peace be upon Him) saw the moon uprising and imagined about its Godhead by looking its splendor. That also vanished after a while, and then He said: Unless my Lord guide me towards His own Path, I surely shall become one of the folk who are astray. This event of Prophet Abraham (peace be upon Him) is a fine allegory for thinking about The Noble Personage of Allah Almighty.