Consequence of the tyranny 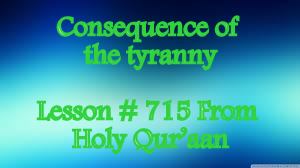 It was described in the previous verses that the afflictions are sent down upon the people for the reason that they do not obey the commands of Allaah Almighty. It is the purpose to reveal the tribulation and adversity that the people should incline towards Allaah Almighty, believe in Him and obey His Messenger (grace, glory, blessings and peace be upon Him and His Last Scripture (Holy Qur’aan), because if they will not do so then they will fall upon evil days.

It is reasonable that they should think deeply about circumstances and consequences of ancient people, that if we shall disobey, the result for us will also be the same as they suffered. The Messengers of Allaah Almighty (peace be upon Them) came unto them, as well as Holy Scriptures were revealed for them, even then, when they did not obey, then afflictions, tribulations and adversities were sent down upon them. The result of ancient peoples’ stubbornness and obstinacy has been discussed in the verses of today’s lesson, so that the people of present time would have to startle from negligence and carelessness by hearing the circumstances of those people, who were ruined.

It is commanded that when they did not learn the lesson from afflictions too, then We (Allaah Almighty) loosened them and opened unto them the gates of all things like wealth and property, honor and emperor etc. till, even as they were enjoying their life with open hearts and were rejoicing in that which they were given.

When they were bestowed with eases and comfort in every field, then they became fearless totally and began to consider their depravity and error as a correct path. When they were happy completely, then Allaah Almighty seized them suddenly and unawares and they could do nothing. The despair surrounded them from all around. At last they were ruined. Their stubbornness, obstinacy, bragging and giving themselves airs, everything was in vain. In short, shame the wrongdoers.

Allaah Almighty gave them much time to understand the matter that they should know the Creator and Lord of this world, and accept their humility before Him. But they remained in their own haughtiness and did not listen to anyone. At last they were defeated very badly and the punishment of Allaah’s torment came upon them in the world and they were destroyed. The punishment, which will be given to them on the Day of Resurrection, is a separate matter.