They say: Why hath no portent been sent down upon Him 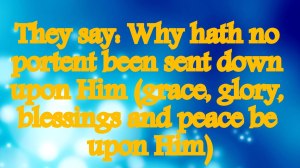 In those days, when Messenger of Allaah Almighty, Muhammad (grace, glory, blessings and peace be upon Him) came in the world, nearly the human beings of the entire world had been going towards the wrong path and passing their life like wild animals, forgetting the human characteristics. Powerful people had become ferocious. They used to deal with the weak and the poor like sheep and goat. Greedy eyes of everyone used to rise towards comfortable and tasteful things of the world. Every person wished that all the things should come under him and his followers’ control, and residuary entire people should dwell as their slaves and servants. They should serve the powerful people like oxen, horses and donkeys.

The same condition was also in the Arab territory. Some people had become rich and powerful, but they could not make others to their slaves completely. So, Islam, which desires equality and equation among the entire human beings, could be begun from the Arab territory only, because some glare of freedom had come there into sight.

This lesson of Islam that “All human beings are equal (among themselves) mutually”, caused to startle the effectual and wealthy people of Makkah, and they saw clearly the death of their honor and magnificence, therefore, they decided to oppose the Messenger of Allaah Almighty (grace, glory, blessings and peace be upon Him).

It is commanded that the disbelievers demand any extraordinary portent from You (grace, glory, blessings and peace be upon Him). Tell them that Allaah Almighty is Able to send down any portent according to your demands, but this demand is a proof of your stupidity. Maximum of you are such people, who are totally un-aware of the principles and rules, in accord with which the world has been created. The wisdom and sense has been bestowed to the mankind more than all other creatures, and the entire world has been filled with such portents, to which, if the human being reflect a little, can recognize immediately. The humankind is not as a donkey, which can understand only with a whip or stick, which does not understand the language of signs. Your claim of clear portent is against the humanity. It can be said by any donkey only: Beat me with a stick, if you want to take any work from me, without it I will never work.