Allaah Almighty  will say: Taste the retribution for your disbelief 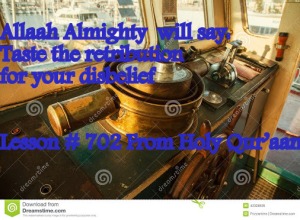 It is commanded that their vision does not rise above the unreal things relating to matter in the world. So they use to remain pleased in the deliberation of these things. They do not acknowledge that they will be raised again after death and a new life will be commenced, after which they will never die.

They can never think to give up the worldly benefits, pleasures and ease of the world for the purpose that, doing so, they will be able to get much, more rest, advantages and delights after death. Their eyes will be opened at that time, when they will be set before their Creator and Lord.

Then they will be asked: Tell! Did you know some real today? At that time, it will come out of their mouth without any hesitation: Yea, verily, by our Lord! It is quite true. Allaah Almighty will command: You could not accept it that I am speaking the truth (in Holy Qur’aan) and you did not obey My Messenger (grace, glory, blessings and peace be upon Him). So, taste the punishment now, the retribution for that you used to disbelieve.

It has been described here that near to them, there is naught save this life of the world only. They have fully faith that they can never be raised again. Their condition will be watchable at that time, when they will be set before their Lord Almighty and He will ask Himself from them: Say! Is that True or False, which was told you?

They will say: By our Lord! That all is verily real. Allaah Almighty will cause to hear His Command after that: You used to consider a useless and self-fabricated matter regarding rising again after death, whereas Our Messenger (grace, glory, blessings and peace be upon Him) had described you very clearly: See! If you will not believe in rising again after death, then tomorrow (on the Day of resurrection), you will be beaten black and blue (punished very severely). Now; while you have seen everything with your open eyes, then you say that “it is real”. Taste the punishment now, you deserved as the retribution for that you used to disbelieve in the world.