Deafness in the ears of disbelievers 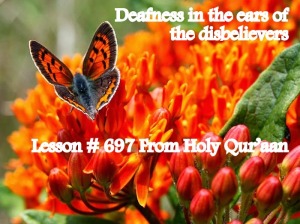 The events of those people, who passed away before the Revelation of Holy Qur’aan and those, who were present at the time of Its Revelation, have been saved in It. But the purpose of collecting their circumstances is neither cutting a joke and nor any amusement. Moreover, the actual aim is that we should learn a lesson from those collections, take from them warning and correct our deeds, so that we would be saved from those mishaps, which happened upon the earlier people due to their wicked deeds.

Only that part of previous events has been taken in Holy Qur’aan which is useful for us as any advice. The behavior of a few infidels of Makkah has been described in this verse. These were effectively great people of that place, and the spirit to maintain their old false custom had settled down in their hearts, because if that code of conduct was changed then they were afraid of losing their dignity through which they used to overpower others.

They used to consider Islam and Its system as against their benefits. Therefore, they did dislike it very severely. They used to come unto the Messenger of Allaah Almighty, Muhammad (grace, glory, blessings and peace be upon Him) and listen to Holy Qur’aan, but the love of their own established way of life and strong determination to keep up their magnificence used to let their hearts not effect. They could not listen anything except the plans of keeping their respect and dignity high, whether they used to observe thousands of the tokens, were not ready to believe.

It is commanded in this verse, “O! Prophet (grace, glory, blessings and peace be upon Him): And of them are some who listen unto Thee, but due to their evil days, We have placed upon their hearts veils, the words of flatterers have been stuffed in to their ears and there is a deafness in their ears, lest they should understand, And even if they saw every token they would not believe therein; so much so that, when they come unto Thee {O Muhammad (grace, glory, blessings and peace be upon Him)} to argue with Thee, the disbelievers say: This is naught else than fables of the men of old. Observing their conditions, the Muslims should think: whether their condition will or not become as of those because of worldly brawls and poisoned joys.

Their cleverness has increased to the extent that they use to see the Muslims apparently, as they want to show that, “we have no enmity with the Muslims, we meet and listen to them attentively. But their talks are only fables of old people, which are not acceptable”. Their coming to the Messenger (grace, glory, blessings and peace be upon Him) is also a trick, so that other people would think that they are trying their best to understand Islam. If their sayings were able to be accepted then they would have accepted them, whereas, absolutely their purpose was not to understand, but to oppose You (grace, glory, blessings and peace be upon Him).

“When they go out after meeting you (grace, glory, blessings and peace be upon Him) then they tell other people: Do not listen to these sayings, these are (let’s flee to Allaah) useless sayings. And they keep their mode entirely separate from and against Islam. These silly people do not understand this a little that they are not damaging Islam even a little bit by doing so, however, they are preparing for their own destruction”.

It is commanded that their presumption has reached the level that they come to you for quarreling and acting like sensible people, these infidels show their opinion: Yes, we listened. It is nothing, otherwise, how could we leave it”? By saying so, they prevent other people from listening to the Messenger’s (grace, glory, blessings and peace be upon Him) sayings, and also they run away themselves too from Him. As though they want to destroy the teachings of Holy Qur’aan by their word and deed, and are trying to remove Islam. But the consequence of it will be no other than that these ignorant will be destroyed at their own and Islam will bud and blossom in the world. So, it happened and their silliness disclosed to the whole world.