Be saved from the wrongdoing 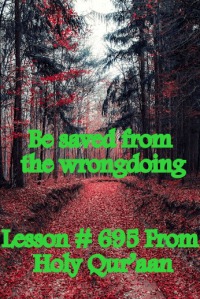 Let’s consider thoughtfully and ascertain again in this lesson on the verse, we discussed in the previous lesson. A rule has been described in the verse, which can never be broken. That rule is: the consequence of the tyrant will never be good. The word “wrongdoer” (tyrant) is very famous. He is called a wrongdoer, who tyrannizes. Tyranny means either to do such an act or to say such words, which hurt either oneself or someone else, or it lets other people to make wrong assumptions about anyone. The meaning of “the consequence will never be good” is that the tyrant is disgraced and humiliated even in the world, and whether he dwells in a good state for a few days in the beginning, but at last, he is ruined and thrown away. If he is saved in the world someway, after death he will undergo severe torment and restlessness. He dies in such a condition that the people begin to hate him.

The worst form of the tyranny is that someone does such an act or talks in such a manner, due to which either he becomes an arrogant of Allaah Almighty, or which causes to spread false notions about Allaah Almighty among the people, or which becomes cause of contempt in respect of either any Prophet/Messenger (peace be upon Him), or Holy Qur’aan, or Islam. In the group of tyranny – ascribing plurality to Allaah Almighty, claim of Prophet-hood after the last Messenger, Muhammad (grace, glory, blessings and peace be upon Him), against the principles of Islam interpretation of Holy Qur’aan as one’s mind desires, denial of Hadith {Sayings of the Messenger (grace, glory, blessings and peace be upon Him)} and all matters of this type come.

In the beginning of Islam, the tyranny was customary in two forms i.e. calling the Prophet (grace, glory, blessings and peace be upon Him) a liar and considering the Holy Qur’aan a collection of some common tales and stories, and not giving any importance to Its Commands. In the previous lesson, these both forms of wrongdoing were discussed, though it is the Cause of this verse’s Revelation. The Formula of this verse will be applied in every age for every form of tyranny. Every tyrant will suffer the same punishment, which has been described in this verse. The form of decision will also be the same, which has been cleared here. That is to say; whosoever will be disgraced and failed at the end, will be tyrant, and whosoever will be rewarded and succeeded, will be known that he was not a tyrant.

The Muslims should reconsider their condition after reciting this verse, “Wherever are they not involved in any form of tyranny? Whether are they not saying such words or doing such acts due to which they would have been disgracing either Allaah Almighty, or His Prophet (grace, glory, blessings and peace be upon Him), or Holy Qur’aan, or Islam? (May Allaah forbid) Wherever our deeds not as are, there is a fear of insult in respect of all above? If it is true, then we are also wrongdoers and greater tyrants, and if the prescribed punishment of tyrants is not applied on us today, then there is a danger of it tomorrow (on the Day of Resurrection).

That has never been proved as wrong, which the Holy Qir’aan has Commanded. There is no need of going in detail, we should think, confessing and being ashamed of our faults that if a Muslim is either a drunkard, gambler, thief, robber, fornicator, dishonest, rascal, greedy of wealth, killer, immoral, arrogant or fond of talking bawdy, then at least, is he not insulting and defaming Islam?