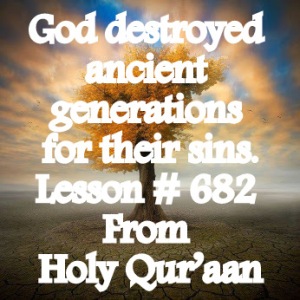 Qarn – (a period of nearly 100 to 120 years, a century, an age or hour etc.), its plural is qaruun. In this lesson and the lesson before this, it aims the people, who were living before this period, so it has been translated as ‘generation’.

It has been advised in the previous lesson: You should think on the condition of those generations, which were living before you, who acquired good influence during their own times. They possessed everything like power, property and wealth etc. whereas you do not have the power and vigor as much as We bestowed on them. Their income was in abundance. It used to rain timely, plentifully and constantly. Resultantly, the gardens and husbandries were green.

It has been described in this verse that the rivers used to flow beneath the trees on the earth near their palaces. The grain and the fruit used to grow abundantly. All the useful things were their obedient. In the presence of so much great blessings, the goods and the property, they were required to remain every time engaged in thanking the real Benefactor i.e. Allaah Almighty, and be saved from His disobedience. They were also required to follow His Messengers (peace be upon Them) and dwell like the pious people.

They began to fulfill their bestial desires being proud of their power, property and wealth. They cast the command of Allaah Almighty behind, did not regard the admonition and preaching of His Beloved Messengers (peace be upon Them) and were entangled in the wicked and evil deeds. At last, it was the result that Allaah Almighty destroyed them due to punishment of their bad deeds and even that He deleted their names from the world. Then He created other generations at their places, which began to dwell there.

If we can get any gain from the history and circumstances of the ancient people/generations, that is, we should do good works by following their good works, and whatsoever they committed wrong and suffered punishments as retaliation of their bad deeds, keeping it in view, we should escape from those bad acts.

Now a day, the people, who are influenced by outward show, say: The accidents in the life of the world are not unusual. What is their relation with the bad acts of the human being? But it has been mentioned clearly, over and over in the Holy Qur’aan and the Sayings (‘Ahaadith) of the Messenger of Allaah Almighty (grace, glory, blessings and peace be upon Him) that calamities and disasters come in the world due to wicked acts and sins of the humankind, and the wrath will be suffered due to them after death.

We should act upon the commands of Holy Qur’aan and the Sayings of the Messenger (grace, glory, blessings and peace be upon Him), and be saved from the sins and evil deeds.