Quran is Tongue of all tongue-less Tokens of God 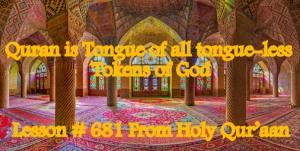 The aim of discussion about it is that the people of the present era should know completely Allaah Almighty and His Divine Power. It has been commanded in this verse that the people should think about the time, which was over before them. Many other nations used to live in this world before us. Allaah Almighty bestowed upon them too much powers and strength, which are not found in the existing people. He caused to rain for them timely and constantly, and made them owners of the land’s production along with other Divine Favors.

Truly, the Holy Qur’an is very strong source to know Allaah Almighty, as it is compulsory to know Him. No doubt, any of the wise man can get knowledge of Allaah Almighty through meditation in everything of the world but it cannot be expected that everyone will meditate too much. Only the Holy Qur’an is such a Revelation, which does not remit any excuse for the human being to remain ignorant from Allaah Almighty. First of all, Its own existence of a peculiar form in the world (being in its original form with effect from its Revelation) is a Token like other tokens. Secondly, It explains everything regarding Itself in Its own Words. Then, the Messenger (grace, glory, blessings and peace be upon Him) is existing, Who conveyed and caused to understand It. Even now, if anybody does not know Allaah Almighty and His Divine Power, then more sorrow and wonder will be considered as very less upon his condition.