Declaration of the Truth 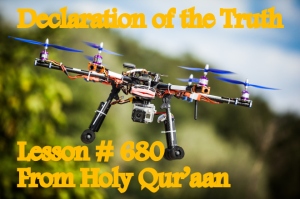 It was described in the previous verses that these indolent persons turn away from the Revelation which comes before them and do not have any regard for it, though, if they meditate in it and try to understand, then it can be understood easily by them that the Creator of this entire world and the other world beyond from it, is only One, Allaah Almighty. He is the Owner of the entire creatures and everywhere His name is Allaah (Almighty), which means “The True Worshipped”.

It is commanded in this verse that in reality, the wise person shall believe in Allaah Almighty certainly by thinking about the incidents, which happen in the heavens and in the earth, but it is possible that either he may not find the time to look at them closely due to carelessness or the time is available but he remains busy in playing and does not intend to know the reality. Even then, such a strong token has come unto them, which can neither be denied, nor there is any accommodation of doubt to reject it, because along with that token, a Warner (grace, glory, blessings and peace be upon Him) has also come. And it is His duty to cause to engage the attention of the people to this side, and teach them that particular Token. That Token is Holy Qur’aan and bearer of that Token is Last Messenger of Allaah Almighty, Muhammad (grace, glory, blessings and peace be upon Him). Every verse of the Holy Qur’an witnesses that Allaah Almighty is A True God Almighty, and manifests the Truth and the Reality. Then, the Messenger (grace, glory, blessings and peace be upon Him) is present to teach about it. After all, there is no excuse to turn away from the biggest Sign i.e. Holy Qur’an, which is existing in its original form. If anyone turns away then, there cannot be any other reason of turning away from it, but the perverseness.

After that, those people have been threatened from the severe punishments, who do not believe in it. It is commanded that those people denied a True Scripture due to stubbornness. But they should bear in mind that the Doomsday is not too much away from them, when they would have to face a very distressed punishment for their evil deeds and disbelief. Surely, every Command of this Scripture shall be accomplished, and they shall weep on their denial from the Truth and enjoy the taste of their arrogance.

The tidings of two kinds of punishment have been explained in the Holy Qur’an for its disbelievers; the worldly punishment as well as the punishment on the Day of Resurrection. It has been proclaimed so clearly for the certainty of both kinds of punishments that there was no difficulty for the wise people in understanding it. But the infidels did not believe. Later on, they suffered in the world for which they were warned. So everyone should be certain that the punishment of the Day of Resurrection is beyond the question too.

God Knows both your secret and your utterance 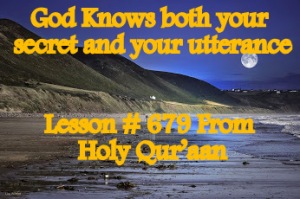 It was explained in the previous verses that Praise be to Allaah Almighty (the entire excellence are only of God Almighty). If any excellence, beauty or quality is seen anywhere and in anything, that is not personal of that individual or thing. But that is a refulgence of any Virtue of Allaah Almighty. The earth, the entire skies and even that everything, which exists into them, those all have been created also by Allaah Almighty. Some of them are appointed as good for you and some of them are bad for you. Allaah Almighty is the Creator of the humankind too and He has fixed a time of their life. Then the human being expires.

The mankind should understand from it that the length of time for existence of the entire world has been determined also. Then, it will be ruined. After that, the aim is to cause to understand the mankind that the human beings will be brought to life and an account of their deeds, which were done by them in the world,   will be taken from him. So it has been described after telling the Divine Power of Allaah Almighty and His overcoming upon the entire that humankind cannot reject the decision of Allaah Almighty.

It is commanded that Allaah Almighty is Existing everywhere in the heavens and in the earth, and there Is only His Sovereignty everywhere also. He knows your secret and utterance, whether those are very little, and He knows also that, what you do. He has spread His tokens in the entire world and has revealed his Holy Word, which is the biggest token. The person, who will reason and think upon these verses, certainly will understand His Divine Power and Strength. Then what is wrong with those people, who turn away from those tokens, which either they observe in the form of tokens of the Divinity of Allaah Almighty or recite in the verses of Holly Qur’aan, and do not understand a little its meanings? If the human beings think, then they may know that the only purpose of their creation is that they should know Allaah Almighty and worship only Him.