The belief of the Christians is in a plurality of God 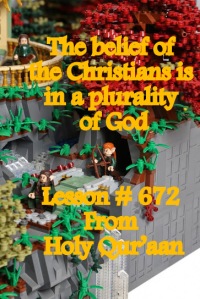 It is the best method of requesting for forgiveness of a criminal before Him, Who is The Mighty and The Wise. When the crime of the criminal is proved and the Ruler is such a Person, Whose decision can neither be put off and nor can it be appealed, then the person, who is going to recommend the culprit, can say only these words, which have been used here by Jesus (peace be upon Him).

Whatever has been told by the Messenger Jesus (peace be upon Him) until now, is such a clear description, that, after which, it is incumbent to establish the Christians that they are proved blameworthy. There is no doubt in this matter that Jesus and His Mother, Mary (peace be upon Them) were made worshipped in the world.

There may be only two reasons of fixing Them (Jesus and Mary – peace be upon Them) worshipped:

Likewise, it appears also from this discussion that actually, this act (the belief in a plurality of God) has been invented and committed by the Christians themselves, so they are accused.

The Messenger Christ (peace be upon Him) will request Allaah Almighty with the same thought: O Lord! If Thou punish them, there is none, who may challenge Thou, because Thou art their fully Master and they are Thy friendless and unable slaves. They were entrapped by Satan and the biggest crime has been committed by them. If Thou wish to forgive them, Thou art Able to do so because they are Thy slaves. None can prohibit Thou in this condition because Thou art the Most Powerful. Thou Knowest also very well that there is no inconvenience, if Thou forgive them because Thou art the Mighty and hath reached the depth of every matter, and Knower of the result of every act.

It is the best method to request a Mighty, a Knower and a Seer Ruler for His mercy and kindness that as more as it may be possible, one should admit His unlimited power and strength, and own helplessness.