Allaah is Witness over all things 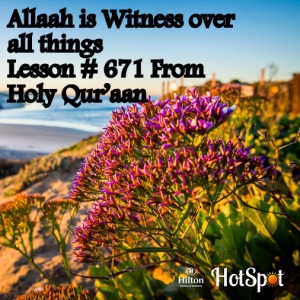 O my Lord! I told them nothing except only that which Thou commanded me. I said to them: Worship Allaah Almighty, Who is my and your Lord and Protector. And admit before Him that you (the people) are helpless and poor. None is able to be worshipped but only He (Allaah Almighty). O Allaah! I was a witness of them while I dwell among them, and when Thou picked me up, then Thou was the Watcher over them Thyself, and there is no any other except Thy, who may watch because Thou art Witness and Watcher over all things.

After that, Jesus (peace be upon Him) thought, surely there would be a particular reason of this question, that after proving the crime of the claimants of my followers, they may be punished properly against their evil deeds. Therefore, He (peace be upon Him) recommended the evil-livers of His nation in very suitable words being a merciful Messenger, which will be discussed in the next lesson.

Glory and Greatness be to God 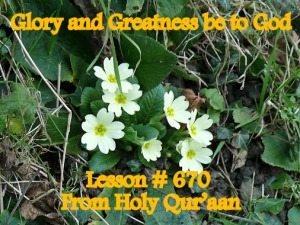 It is a promise of wideness in the sustenance for the believers (the Christians) of Jesus (peace be upon Him). But those persons will be punished very severely, who spend in disobedience of Allaah Almighty. This promise of wideness in the income was fulfilled, but the Christians did not spend their wealth in accordance with the commands of Allaah Almighty. Moreover, they spent it for the purpose of immoral luxury, gambols and games. For making them acquainted with an event of the Day of Resurrection, it has been described in this section that an inquiry will be repeated from the Messenger Jesus (peace be upon Him) due to His nation. The aim is that they should give up rebellion behavior and wickedness; otherwise nobody will be able to save them from the wrath of Allaah Almighty.

It is being commanded: Listen by opening your ears, Allaah Almighty will ask Jesus (peace be upon Him), “Did you say to your nation: Take me and my mother for two gods beside Allaah and worship us? Jesus (peace be upon Him) will say humbly: Good and Pure from all defects – Allaah! It did not befit me to utter that to which I had no right. How can it be so from me whether I am Your Servant and Messenger?

After that, Jesus (peace be upon Him) requested to Allaah Almighty: If I had ever said it, then certainly You would have known it, because You know very well about everything and nothing is out from Your Knowledge. Then how can it be possible that You would not have known that I would have spoken such a false and impure word? I had never thought in such a manner, otherwise You had known that also, because You are the Knower of entire Open and Hidden Things, and even that Your Secrets can never come in to my knowledge, nor can I think about them. Actually the Knowledge of Hidden Things is only Yours Excellence, because Hidden is that, which is Invisible for the mankind but all is Visible to You.

Jesus (peace be upon Him) said: My Lord! While You bestowed upon me a higher Dignity of the Messenger, then how could such word come out from my mouth, in which there was insolence of You and proof that You are needy of any supporter (May God forbid). It is like finding a fault in to You, if anyone considers that You are needy of any helper, whereas You are Pure from all kinds of defects and faults. So Jesus (peace be upon Him) used the word Sub-haanaKa (Glory be to Thee) in the beginning of his answer – and then said: Being a Messenger, it did not befit me to utter that I and my mother should be taken for two gods beside Allaah and (let us flee to Allaah) You are not sufficient to be God. In this part of the verse Jesus (peace be upon Him) said: Only You, are the Knower of Things Hidden. You know my open and secrets. I produce Your Knowledge as my witness that I did never say these words.

This entire section of Holy Qur’aan is too much full with Glory and Greatness of God Almighty, and devotion and humility of the human beings before Him, that the hairs of a person stand on end after reciting it. Everyone would have to understand here also that the Muslims believe in Jesus (peace be upon Him) too. So the lesson, which is necessary to be learnt by the Christians, is more compulsory for the Muslims to be learnt too.