Cross questions from the Messengers 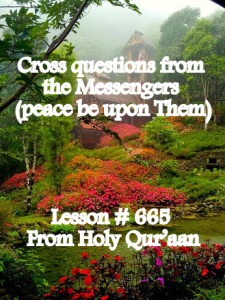 Some verses prior to the mention regarding the bequest and the executor, it was told that everyone should think upon oneself deeply. That person is not harmed against the depravity of any other, who is right personally. As though, others’ good works and fairness will not be useful for that person, who is evildoer until he does not correct and change himself.

It was told that Unto Allaah Almighty you will all return; at that time Allaah Almighty will inform you of what you used to do. As if, we should be operative in the world keeping this rule in view that reality of our all works and deeds will be exposed before Allaah Almighty. All the acts (good or bad) will be examined and re-measured. After that a likeness about doing works correctly has been exemplified, through which the executor has been urged to keep himself honest, and the remedy of dishonesty has been described.

This subject has been cleared in such a manner that all the humankind will be gathered before Allaah Almighty on the Day of Resurrection. Allaah Almighty will ask the entire Messengers (peace be upon Them) after collecting them: What was the reply of the people, when you admonished them and called towards the good works? They will say: We do not know about it, whether they obeyed or rejected us, because belief and disbelief is related with the heart, which is a hidden thing. Nobody knows the condition of the hidden things except Allaah Almighty. It was our duty to convey Your Message until we lived between them. We used to deliver Your Message and display it unto them by acting ourselves upon Your Instructions. Even during that period, we were unable to know about real condition of their hearts. Then we were demised. After that only You know the state of their acceptance or disbelief. Only You are able to Know about those things, which cannot be seen by us, except it that, which, to whom and how much You desire to tell.

Common people have been warned from this description: While the Messengers (peace be upon Them) would not be able to escape from query, then how will you be saved?