Remember! You all would have to return unto Allaah 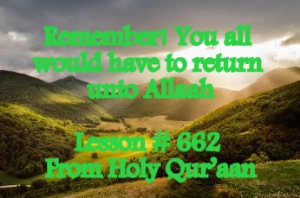 One such rule has been told to the Muslims in this verse, which is useful for the entire human beings and everybody can find the Straight Path by acting upon it. That Rule is: Every individual is responsible of one’s own deeds. None should harm oneself in imitation of one another. But it is compulsory that one should refrain from such works and as far as it may be possible, one should try to prevent others too from the evils. If anyone does not accept, don’t worry; let them do their own job.

The Muslims are being commanded that it is necessary for them to save their souls from destruction. Moreover, they should cause to know all other people that they will suffer misfortune of their own evil deeds. So every person should abstain from evil works. If they turn off your advice with a joke or deny accepting, they mar their own. They can never injure you, even that they are unable to perish any hair of you. If you will do as they do, you will harm yourselves in imitation of others by involving yourselves in evil deeds, and it is not befitting for any wise person to injure oneself.

Commit it to your mind! You all people would have to return unto Allaah Almighty; on that Day (the Day of Resurrection), He will show you that every mankind would have to suffer the punishment of one’s own evil deeds and in imitation of whom one was involved in evils, they will never be helpful for the one whether they were fathers, ancestors or anyone else.

It is known from this description that “Think properly before you do any work” that “the one is responsible oneself of one’s own deeds”. If that is a bad work, give it up and never do, otherwise, the one will be punished properly. It is the responsibility of every Muslim to prevent others from committing any evil work and the best method of carrying the message of Islam to others, is that “the one should do good works personally, so that the other people do also in imitation, observing the one”.