Come unto that which Allaah has Revealed 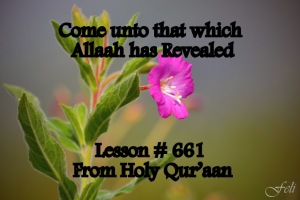 It is commanded that when the people are invited towards the prescribed Way of Allaah Almighty and His Messenger (grace, glory, blessings and peace be upon Him), they allege falsely: “Enough for us is that path, which our ancestors have left behind for us. They used to act upon these traditions and teach us the same”. In their reply, it has been told: Ask them, “Whether is it possible that your fathers may be unaware from the original knowledge or impossible? Is it not possible that they did not know the correct way? Would you like to follow them even then in such condition? It seems against wisdom”.

It is visible that if any knower more than them and who is well aware of the paths, says that the path, on which they used to go away and guided their children to follow them, at last will lead and let them fall in a blind pit, and then it will not be possible to come out from it, then certainly the talk of that experienced and well acquainted person is able to be listened and believed.