The Retaliation of the Evil Deeds 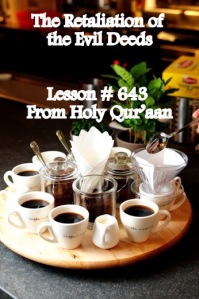 The mankind was guided towards the path of goodness and improvement in the previous verse and was told clearly that you cannot gain your end by caste, religious title or active claims. These all affairs are useless. It is the decision of Islam that there is only one path for that person, who wants to get rid of fear and grief.

Allaah Almighty has given a clue openly about that fundamental weakness, which carries anyone toward a sin, and practices of the Children of Israel have been described as its example, that the Messengers (peace be upon Them) of Allaah Almighty came to them and brought His Commands. They (the Jews) were prevented from unreasonable desires through these Commands, but they had formed their habit to do that, what they wished, whether after that they suffer.

Experience of the mankind declares the same that when anyone falls upon evil days, he/she begins to fulfill personal desires like insane. So if you observe any person or nation has been engaged in grazing like cattle, rending like ravenous and fulfilling lust like animals, imagine now! Any vigorous and big misfortune is going to be fallen upon their heads.

It was told earlier that there are three necessary matters for the deliverance of human being:

The person, who will act upon these three deeds, will be able to obtain deliverance.

It has been described in this verse that instead of believing in the Day of Resurrection and confuting the punishment against bad deeds, they, on the contrary, fixed in their hearts this thought, “Do whatever you wish, you will be OK”. Therefore, they left listening to the well doers and became willfully blind and deaf. Allaah Almighty imposed upon them worldly punishment, Bukht Nasar attacked, ruined their country and imprisoning them brought Babel City. When they got away from this misfortune painfully, they repented. Allaah Almighty accepted their supplication but after a few days, their new generation adopted the same behavior and involved in evils with the cession of mind. And then again they were willfully blind and deaf. It is true that the desires of a mankind make him willfully blind and deaf. But you should not consider that you will never be seized due to evil deeds. You can be willfully blind but Allaah Almighty is observing your all motions. Where will you go being saved from His Sight?