Presumption of the Jews 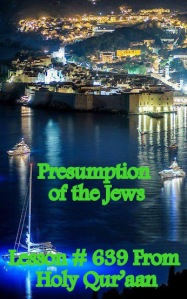 Magluulatun – (fettered, chained), it is from gullun, which means “to tie, to fasten”. It aims that Allaah Almighty (Let us flee to God, Na-‘uuzu BIllaah) is ‘a miser’. Gullat – (are fettered), this word is also from gullun and it is a curse for them. It means that their hands should be fettered. It is like a proverb that “showing one’s displeasure to that person, who displeased the one”. Any sign of curse is not necessary if any person is cursed by any human being, but if Allaah Almighty say “Kun” that is done without any delay “Fayakuun”. lu-‘inuu – (they may be accursed), it is from la’-nat, which means ‘curse’. It is effect of above mentioned both curses that the Jews are miser as well as cursed too.

The Jews had lost their wits too much that they used to begin speaking the arrogantly words in the Grace of Allaah Almighty. Such a matter was described also in Surah ‘Aali-‘Imraan. It was told there that when they are said, “Spend your property for the Sake of God, pay the poor-due and give the alms, and consider it as you are lending Allaah Almighty. He will return you twofold, threefold or more in its retaliation. These people are so outspoken that they begin to say, “Allaah is (let us flee to God) a beggar and we are rich, hence He begs from us to borrow Him”.

In this verse, it has been told that they begin to talk nonsense, observing the Muslims improving and increasing, and decreasing their own condition day by day, and say, “(Na-‘uuzu BIllaah) Allaah’s Hand is fettered and He is a niggard (let is flee to God) in giving us”. Allaah Almighty commands, “Talking so, you are cursed and you irritate Him. Actually you are misers. Both His Hands are spread out wide. One Hand is of Bounty and the other of His wrath. Your ancestors were under His Hand of Bounty due to their obedience and abstinence. Whereas you are under His other Hand of wrath due to your own wickedness and disobedience, and collecting His curses due to wicked deeds and tricks”.

Apparently some of the Jews are seen wheedling but their hearts are never pure for the Muslims. They use to raise any new confusion every time and have armed to trouble, even that they use to stir up others also to fight against the Muslims. The same condition is of the Christians and the Infidels.

Their practiced hobby is to spread the mischief and excite the disturbance. They do not want that the people may dwell in peace, safety and cease the hostilities. But Allaah Almighty does not like them, who cause to fight mutually themselves. So the sign of this disapproval will keep them confused in the world and they will suffer a very severe punishment too on the Day of Resurrection.

The history is witness that the entire tricks and plans of the Infidels, Idolaters and the People of the Scripture failed. On the contrary to their efforts, Allaah Almighty elevated the Muslims. We learnt from this verse that the people, in which disunion and mutual quarrel will be, and they will desire to cause to fight the people, and try to spread the mischief, corruption, disturbance and confusion in the world, they will fail. But at the other hand, those, who will live united and on friendly terms, and they will try to influence the quarrel and stop the corruption, mischief and disturbance, certainly they will succeed.