Acting upon the Commands of Gospel 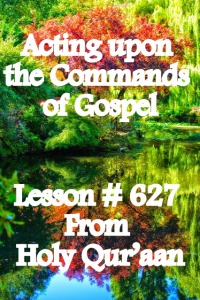 Qaf-fayNaa – (We caused to follow in), it is from taqfiyah, which has been derived from qafaa. Qafaa means “the nape of the neck”. Taqfiyah means “To send another person, who follows him, who was sent earlier”. Maa  bayna  yadayhi – that which was between his two hands (It is an Arabic proverb), the thing, which has come into existence earlier than any person or thing. Here it aims Torah which was revealed before Jesus (peace be upon Him) and Gospel.

It has been being described by Allaah Almighty from the very first, “We revealed the Torah and revealed in it the commands about every matter”. The Prophets (peace be upon them) and the scholars used to judge the mutual quarrels in the light of these commands. When they expired, the Children of Israel casted the commands behind and did not care. The punishment of stoning was removed totally; it was the reason that the Jews were Infidels, because they denied the command of Allaah Almighty. Although they kept the command of “retaliation” in order but left to act upon it and the powerful people began to take the retaliation in manifolds from the weak and the poor. In this regard the Jews were tyrants, that, when a person of higher class was killed by any person from lower class, then in retaliation, his two, three or more near relatives were used to slay. And if any person from a higher class used to kill any person from a lower class, he was not punished properly. Like this, the same manner was in business and money dealing, that the powerful used to receive much, more money from the weak and did not pay his right properly.

Acting Upon the Commands of Gospel

At first the Jews were told that they should act upon the commands of Torah and neither change in the acts for a little worldly gain, and nor they should hide anything from it.

The Jews refused to obey the commands in two ways: Either they removed the command from the Scripture entirely and said, “This command does not exist in the Torah”. Such people were appointed as disbelievers as per first verse of this section. Or they admitted the command but left to act upon it and changed it as they wished in accordance with their pleasure. Such people have been named as “the tyrants”.

The Commentators have written that there were two tribes of the Jews in Madinah, named; Banu Qurayzah and Banu Nazayr during the period of the revelation of these verses. Banu Nazayr were powerful, while Banu Qurayzah were weak. The order of retaliation did exist in the Torah i.e. that the punishment of any offence like murder, injury during quarrel or if somebody wounds someone else, should be given equally to all offenders, whether anyone of them belongs to higher class or lower, is powerful or weak, rich or poor. But Banu Nazayr used to get life of human or property double in the form of retaliation or money from Banu Qurayzah in the haughtiness of being powerful, and on the contrary pay them half. So they are called tyrants and cruel in the second verse.

It has been described in the verse that such people, who practise deceit, are evil-livers and disobedient.

“His mouth is most sweet: yea, he is altogether lovely. This is my beloved, and this is my friend, O daughters
of Jerusalem.”

“And remember, Jesus, the son of Mary, said, ‘O Children of Israel! I am the messenger of Allah (sent) to you, confirming the Law (which came) before me and giving glad tidings of a messenger to come after me, whose name shall be Ahmed.’ But when he came to them with clear signs, they said, ‘This is evident sorcery!’ ”

All the prophecies mentioned in the Old Testament regarding Muhammad (pbuh) besides applying to the Jews also hold good for the Christians.

“Ahmed” or “Muhammad” meaning “the one who praises” or “the praised one” is almost the translation of the
Greek word Periclytos. In the Gospel of John 14:16, 15:26, and 16:7. The word ‘Comforter’ is used in the English      translation for the Greek word Paracletos which means advocate or a kind friend rather than a comforter.
Paracletos is the warped reading for Periclytos. Jesus (pbuh) actually prophesised Ahmed by name. Even the
Greek word Paraclete refers to the Prophet (pbuh) who is a mercy for all creatures.

Some Christians say that the Comforter mentioned in these prophecies refers to the Holy Sprit. They fail to realise
that the prophecy clearly says that only if Jesus (pbuh) departs will the Comforter come. The Bible states that the
Holy Spirit was already present on earth before and during the time of Jesus (pbuh), in the womb of Elizabeth, and    again when Jesus (pbuh) was being baptised, etc. Hence this prophecy refers to none other than Prophet
Muhammad (pbuh).
4.
Gospel of John chapter 16 verse 12-14: “I have yet many things to say unto you, but ye cannot bear them now. Howbeit when he, the Spirit of truth is
come, he will guide you unto all truth: for he shall not speak of himself; but whatsoever he shall hear, that shall he     speak: and he will shew you things to come. He shall glorify me”. The Sprit of Truth, spoken about in this prophecy referes to none other than Prophet Muhammad (pbuh)

NOTE: All quotations of the Bible are taken from the King James Version.